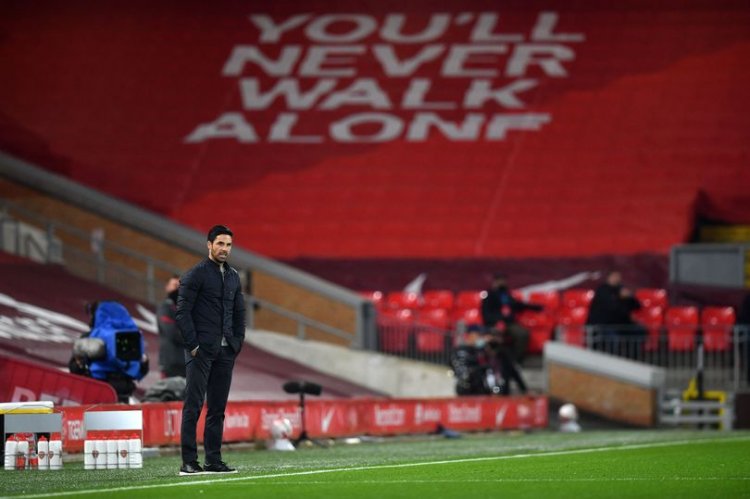 What were your thoughts on the performance?

A really tough place to come. They're a really good side. We stayed in the game for almost the whole match.

Having the lead we should have handled the situation a little bit better, we conceded the goal too early straight after that. We competed throughout the game knowing the difficult moments you're going to have when you come to Anfield but as well with real belief that we could get something out of the game.

When we had the clear chances to make it 2-2 we didn't score. Obviously if you want to get something out of the game you have to do that.

Gary Neville praised your resilience, what does tonight tell you?

We're on a different journey to them. They've been together for five years. They weren't able to do what they've done tonight two or three years ago that's for sure.

They have a lot of good work, a lot of belief, great recruitment and they have improved the players they have. This is what we have to do.

They've set the bar probably at the best standard the Premier League has seen in many years. This is where we have to get and obviously we've still a long way to go.

How much confidence do you take from the resilience?

I told them that I applaud them, with all the problems, issues and things with some processes we had throughout the game, mostly when we had the ball, to pick the right pass, to make the right decision, to read much better the game moments.

It's still the belief that the players had. Even at half-time I could see that they still believed that they could get something out of the game.

We tried to put them under a little bit of pressure, as much pressure as we could, we were really aggressive trying the high press in many moments. But [Virgil] van Dijk plays a 60 yard pass to [Mohamed] Salah's chest and they are out. They have to try about 15 metres.

This is real quality and that's where they've spent the money they've done. Credit to them.

Have you spoken to Alexandre Lacazette since full time?

The boys were really disappointed to lose the game, they really believed we could come here and do it. For large periods of the game we were right there.

Obviously he had the best chance in the game to make it 2-2 and again put us in a really strong position. He had a great game, he put an incredible performance again and I'm pleased with him.

What's the latest on Houssem Aouar?

We don't have any news on new players and either with players that might leave the football club. It's a week to go, I think it's going to be really busy for other clubs because not much business has been done.

Will it be really busy for you?

What changes do you have to make for Thursday?

We'll see how the boys are, how they recover. Obviously today was a really physically demanding match, we will see the players we have available and try to come here to win again.

There seems to be more belief than last season's 3-1 defeat?

I don't know. I wasn't here at the time. What I can tell you is the belief I sensed from the players and the disappointment they have today in the dressing room but as well that they have to face the reality that any team when they come here this is the hardest ground to come to.

You could see big teams how they were knocked out here. I'm pleased we competed throughout the game. There's a lot of things in our hands that we can do better and will do better.

That's going to help us so much in the process. I want to see my players upset and angry when they lose the game.

Did you think an equaliser was coming late in the game?

I could see it coming and I had the sense that we were growing, that we were going to have the moments. The substitutions after helped but it wasn't meant to be.

What is your view on the 10 positive COVID-19 tests in the Premier League?

All the managers and all the clubs are really aware that this situation can happen, that there can be positives. All the clubs and the Premier League have done really good work to create a really safe environment where we have managed the positives in really low numbers up till now.

We have to keep doing that, we have to keep talking to players and staff to maintain the levels of alert. We can't ease off any of the rules that we have at the moment. Hopefully we can maintain it under control.

Where to find PSG vs. Riyadh All-Stars on US TV

Manchester City have been tipped to regain the Premier ...