The striker missed a glorious opportunity to equalise at 2-1 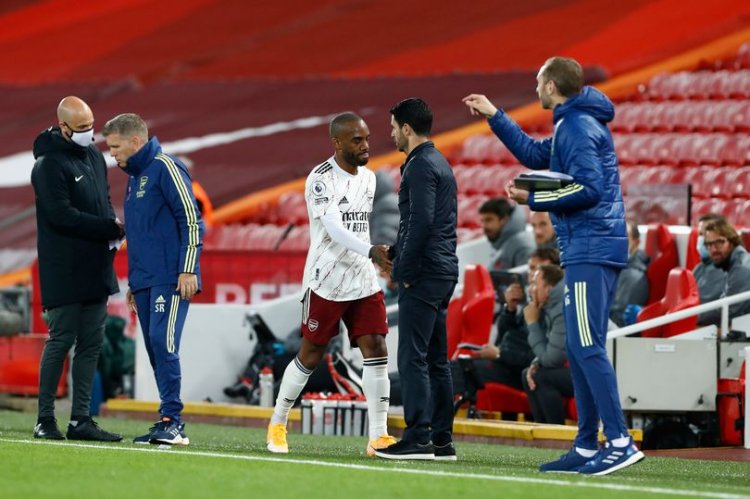 Alexandre Lacazette may have scored for Arsenal against Liverpool but he still appeared to leave the field with regrets.

The striker opened the scoring for the Gunners against the run of play, yet they were unable to hold onto the lead as they conceded two in the following nine minutes to trail 2-1 at the break.

With Liverpool controlling possession, it was a difficult evening for the Frenchman, who struggled to get on the ball that often.

Yet he had a gilt-edged chance to add a second when he ran through on goal in the 63rd minute, only to fire straight at Liverpool goalkeeper Alisson.

Lacazette appeared in two minds about whether to try and round Alisson or shoot and, with the goalkeeper staying on his feet and making himself big, the striker eventually spurned what was a brilliant opportunity to equalise.

BBC pundit Chris Sutton praised the goalkeeper's save and called it a huge moment in the match.

He said: "How many better chances will Arsenal get than that?

"It's a big save, Alisson doesn't go down too early. There were question marks over whether he would be fit. Jurgen Klopp must be delighted that he was because that is a massive save."

It was Lacazette's last major involvement in the game as he was substituted for Eddie Nketiah 10 minutes later - and the chance seemed to weigh on his mind.

The striker slumped in his seat on the substitutes' bench after going off and clearly looked distraught.

It was an emotion that was picked up on Sky Sports, too, with Gary Neville saying it was the sort of opportunity that Lacazette will be dwelling on.

He said: "He is thinking about the chance. Strikers don’t let them go."

It proved to be a costly miss, with Liverpool adding a third goal late on.

Most popular soccer websites in USA during World Cup 2022

How HBO Max & Telemundo did on USWNT debut