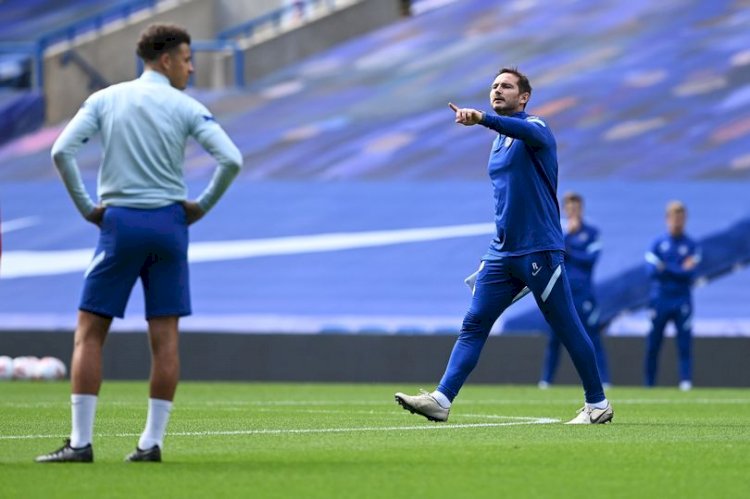 Frank Lampard of Chelsea during a training session at Stamford Bridge on August 28, 2020 in London, England. (Photo by Darren Walsh/Chelsea FC via Getty Images)

Frank Lampard has warned Chelsea fans not to get ahead of themselves amid the club's summer spending spree.

If the Blues get the Kai Havertz deal over the line, then Chelsea's spending will be more than £200million for the transfer window, and they might not be done.

With the addition of Hakim Ziyech, Timo Werner, Ben Chilwell and Thiago Silva, Chelsea have been tipped with a title bid and to close down Liverpool and Manchester City.

The Blues have also been tipped with a decent run in the Champions League, FA Cup and Carabao Cup with all their incomings.

However, Lampard admits they can't get ahead of themselves as the new players try to work their way into the squad.

"We have an idea to try to add to improve, as you should do at a club of our level," Lampard told the Chelsea website.

"We know that has not been absolutely possible for us, and we knew the ban and all this talk, and it was important for me to try to improve the squad and with the players that we are bringing in.

"It feels that way, but we need to be careful of getting too far ahead of ourselves because we need to give time to players to come in and adapt to the way I want us to play and to their team-mates

"But I think the moves we are making our positive, so I am excited and then it is up to us to get our heads down and work very hard."

Manchester City have been tipped to regain the Premier League Title by a Super C...

Where to find Barcelona vs. Getafe on US TV

How Have The Four Previous Head Coaches Got On When Fac...