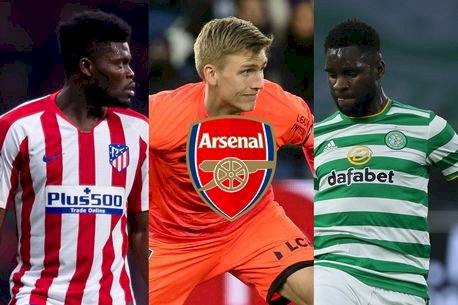 The Gunners are back in Premier League action on Saturday evening, as they play London rivals West Ham United in the first league match of the season at the Emirates Stadium.

Arsenal have been busy already in this summer’s transfer window - bringing in four new players - and if reports are to be believed, then there could be more coming to north London before the window shuts in just 27 days time.

Willian, Gabriel Magalhaes, Dani Ceballos and Cedric Soares have all been signed by the Gunners already.

Mikel Arteta is about to enter the first full season in charge at the Emirates, and will be looking to build on the progress made during the last campaign.

Transfer rumours continue to flood in for the north London-based club, and you can keep up-to-date with everything in today’s transfer blog.

According to Icelandic outlet DV, Runar Alex Runarsson has had a medical ahead of his proposed move to Arsenal.

The Gunners are reportedly close to signing the Dijon goalkeeper as a replacement for Aston Villa-bound Emi Martinez.

The 25-year-old is set to sign a five-year contract with the Gunners after being identified by their recruitment team.

Runarsson was part of Iceland’s World Cup squad in 2018 and has also spent time in Denmark before he moved to France.

David Raya was omitted from Brentford’s squad for their Championship opener with Birmingham City at the weekend amid transfer interest from Arsenal.

The goalkeeper has caught the attention of the Gunners who are lining up a potential replacement for Emi Martinez.

Is this the clearest hint yet that he will be on the move this summer?

Arsenal fans think they’ve spotted a hint about an announcement

Arsenal supporters have taken to social media after club legend Ian Wright was pictured at the Emirates Stadium following comments he made on Match of the Day on Saturday.

According to The Athletic, West Ham are interested in signing Arsenal left-back Sead Kolasinac to strengthen their left-back options.

But The Guardian claim the Bosnian has had talks with Mikel Arteta, and although he knows he is behind Kieran Tierney, but wants to fight for his spot unless something significant changes.

Arsenal are poised to announce the departure of Emiliano Martinez in a £20m deal that could help fund moves for Thomas Partey and Houssem Aouar.

Torreira could be on the move

Lucas Torreira could be on the verge of joining Torino.

The Uruguayan midfielder is said to be on his way out of the Emirates Stadium this summer with Mikel Arteta happy for him to leave.

And according toTuttoSport, Torreira was not left out of the team for the win over Fulham because of injury as reported, but he was omitted to ‘leave the way clear’ for a move to Torino.

A deal is not done yet, though, with Torino still keen to land Torreira on a loan with a mandatory purchase clause, while Arsenal want the money upfront on a permanent signing this summer.

Arsenal have reportedly made £22.5m bid for Odsonne Edouard.

Speaking on the Transfer Window podcast last week, Ian McGarry has shared what he’s been told.

“It’s our information that the initial offer from Arsenal was £15m, which was rejected by Celtic.

“That offer has since been increased to £20m with add-ons up to the value of another £2.5m.”

How much Tottenham missed out on amid Serge Aurier tran...