Arsenal transfer news with the latest on Houssem Aouar, Alexandre Lacazette, Emi Martinez and more - as well as all the Premier League build-up 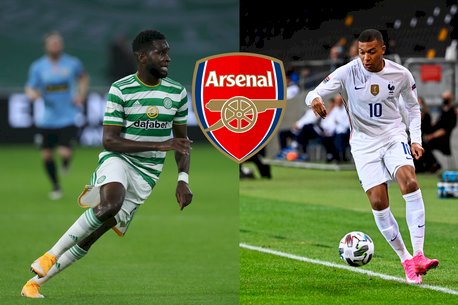 The Gunners got their 2020/21 Premier League campaign underway in resounding fashion on Saturday lunchtime, putting newly-promoted Fulham to the sword.

Away from matters on the pitch, Arsenal will be looking to continue Arteta's rebuild.

Gabriel scored on his debut and Willian also impressed, but the Gunners boss still wants to complete further additions.

Atletico Madrid's Thomas Partey is a target, Lyon's Houssem Aouar has been linked, Emiliano Martinez could be on the way out and David Raya continues to be talked about.

That’s according to the Daily Mail, who say Guendouzi likes the idea of switching London for Madrid.

It comes amid talk of a player-plus-cash deal for Arsenal’s summer target Thomas Partey involving Guendouzi.

Arsenal will indeed get their man in David Raya, it seems.

The Brentford goalkeeper is set to become the Gunners’ new number two after Emiliano Martinez completed his move to Aston Villa today.

And that is highlighted by the fact Brentford are now searching for Raya’s replacement.

The Bees are said to be lining up Charlton stopper Dillon Phillips ahead of Raya’s expected departure, according to The Sun.

Torreira could be on the move

Lucas Torreira could be on the verge of joining Torino.

The Uruguayan midfielder is said to be on his way out of the Emirates Stadium this summer with Mikel Arteta happy for him to leave.

And according toTuttoSport, Torreira was not left out of the team for the win over Fulham because of injury as reported, but he was omitted to 'leave the way clear' for a move to Torino.

A deal is not done yet, though, with Torino still keen to land Torreira on a loan with a mandatory purchase clause, while Arsenal want the money upfront on a permanent signing this summer.

Emiliano Martinez has completed a move from Arsenal to Aston Villa after the two clubs agreed a deal.

As reported by Birmingham Live, the fee is said to be in the region of £20m and the goalkeeper was set to undergo a medical on Saturday.

The writing was effectively on the wall for Martinez after he was left out of the Gunners' matchday squad against Fulham and Mikel Arteta confirmed the decision was transfer related.

Ian Wright has urged Arsenal to get Pierre-Emerick Aubameyang signed to a new contract.

Manager Mikel Arteta has said he is "really optimistic" that the club and the player will soon come to an agreement to extend his stay in north London.

But for Wright, he wants confirmation as soon as possible.

He will be their best signing.

I’m going to see papa Aubameyang tomorrow, they have to sign, simple as that, and I’m not going to leave.

Arsenal may have just been handed a massive Kylian Mbappe transfer boost.

The Times reports that the 21-year-old has told the Champions League finalists that he wants the 2020/21 campaign to be his final season in the French capital.

Perhaps providing the greatest encouragement to English clubs, it's reported that he is keen on either a move to Spain's La Liga or the Premier League.

Could Mbappe be the next big-money signing at the Emirates?

Arsenal have reportedly made £22.5m bid for Odsonne Edouard.

Speaking on the Transfer Window podcast, Ian McGarry has shared what he's been told.

It's our information that the initial offer from Arsenal was £15m, which was rejected by Celtic.

That offer has since been increased to £20m with add-ons up to the value of another £2.5m.

Lacazette: I am happy at Arsenal

Alexandre Lacazette has once again stressed his happiness at Arsenal.

The Frenchman's future is a hot topic at the moment, with him being heavily linked with a move away from the club before the summer transfer window closes.

This week, ESPN reported that Atletico Madrid and Juventus have explored the possibility of signing the Frenchman, but have been told they would have to pay close to £40m to secure his services, a fee neither club have as yet shown any willingness to match.

I am really happy, it's only the press who say I'm not happy and want to leave," Lacazette told BT Sport. "But me from the beginning I've said I'm happy with Arsenal, I want to play and win titles. We won a title last month, so I am happy with Arsenal."

Could Raya be on the move

With Emi Martinez closing in on an Aston Villa switch - could David Raya be the man to replace him?

Well, he was omitted from Brentford's squad for their Championship opener with Birmingham City amid transfer interest from Arsenal.

The goalkeeper has caught the attention of the Gunners who are lining up a potential replacement for Martinez.

Is this the clearest hint yet that he will be on the move this summer?