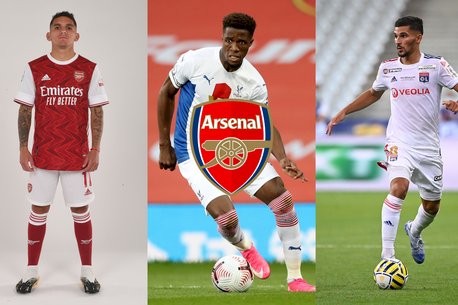 Arsenal have completed four deals in the summer transfer window so far.

Dani Ceballos is back for another season-long loan spell from La Liga giants Real Madrid, while Willian, Gabriel Magalhaes, and Alex Runarsson are the three permanent signings

But another midfielder is on the agenda, with Atletico Madrid's Thomas Partey understood to be a key target, whilst Lyon's Houssem Aouar has also been linked with a move to north London.

There could also be some exits as players look for fresh starts elsewhere.

Time is ticking down in this summer's transfer window and the Gunners have until Monday, October 5 to finalise moves in and out at the Emirates Stadium as Mikel Arteta looks to further strengthen his squad.

With that said, here is a round-up of some of the latest Arsenal transfer rumours doing the rounds.

A number of players have been linked with a move to Arsenal this summer, from the likes of Philippe Coutinho to Dayot Upamecano.

And we have gathered the latest odds from BetVictor to take a closer look at those most strongly tipped to join the north London club.

Wilfried Zaha is at 4/1 as links have resurfaced over recent weeks after the Gunners opted against a deal for him last summer and signed his international teammate Nicolas Pepe instead.

Interestingly, some Arsenal fans are excited about the idea of Zaha making the switch from Selhurst Park to Emirates - so much so that they've proposed a swap deal involving Reiss Nelson.

Lucas Torreira is closing in on a move to Atletico Madrid.

That's according to transfer expert Fabrizio Romano, who claims the Uruguay international has already agreed on personal terms with Diego Simeone's side.

But the two clubs are yet to reach an agreement as Atletico must offload midfielder Hector Herrera before they can complete a move for Torreira.

In a possible hint that a deal is at an advanced stage, once again Torreira was left out of the Arsenal matchday squad for their Carabao Cup tie away at Leicester City.

When previously asked about his future, the 24-year-old refused to rule out the prospect of leaving.

"Today I need to think about my future very well," he told Sport890 at the beginning of August. "I have a contract with the club and I have to respect it, obviously if I have to leave it will be for the best.

"We have to be calm and wait."

Speaking of Romano, he has revealed the Gunners' plan amid links to Houssem Aouar and Thomas Partey.

The good news for Arsenal fans is that signing a midfielder before deadline day is very much the priority for Arteta and technical director Edu.

However, Romano claims that it's one of Aouar and Partey that could arrive at the Emirates Stadium - not both - and much depends on if they're able to sell some first-team players like Torreira.

"For sure, Arsenal will try to get a midfielder," he said on talkSPORT. "It will be Aouar or Thomas.

"But it’s important for them to sell players; we talk about [Lucas] Torreira, [Sead] Kolasinac and Sokratis.

"They need to sell and if they sell players, they will come back for one of Aouar or Thomas."

Atletico Madrid make transfer decision that could be great news for Arsenal and ...

Four players that could still join Arsenal on transfer ...