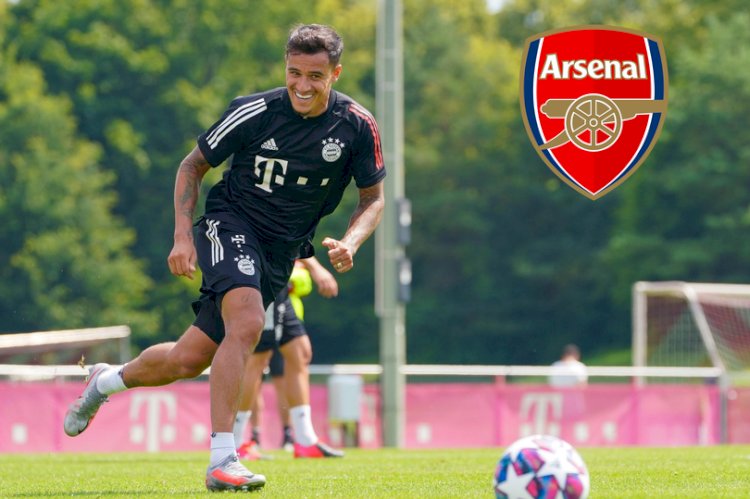 The Brazilian has been heavily linked with a move to Arsenal in recent weeks and is set to make his final Bayern Munich appearance in the Champions League final.

Arsenal could get an update on Philippe Coutinho's future next week.

The Gunners are one of the clubs who have reportedly been offered the chance to sign the attacking midfielder on loan for the 2020/21 season, with head coach Mikel Arteta looking to add creativity to his squad.

However, the Brazil international's agent, Kia Joorabchian, has previously admitted his client would like to focus on the remainder of the Champions League campaign before thinking about a move.

"Because the Champions League will run until August 23, it will be difficult for players like Coutinho to make any commitments or moves pre that date," Joorabchian said.

"He is not at all against staying at Barcelona."

And when asked about his future on Thursday, Coutinho said he isn't thinking about his next season because he's fully focused on winning the Champions League with Bayern Munich.

"My mind is fully focused on the competition," he said. "It's a unique opportunity for us. I'm very happy to be in the Champions League final.

"On my future, I haven't thought about it because I'm only thinking about the final."

Judging by comments from Coutinho and Joorabchian, coupled with Bayern taking on Paris Saint-Germain in the Champions League final tonight [Sunday August 23] it could be that the midfielder's future becomes clearer in the next week.

With that said, the final decision rests with the newly-appointed Barcelona head coach Ronald Koeman.

"The head coach will make the decision," Barca chief, Josep Maria Bartomeu, said this week. "If he wants him to continue, next year he will play with us."

Kai Havertz has explained how he can replace what Eden Hazard did for Chelsea af...