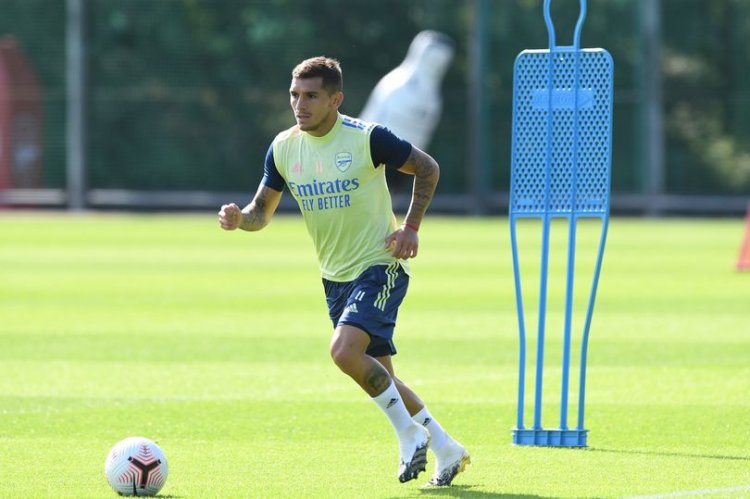 Lucas Torreira is set for a loan move to Atletico Madrid. (Image: Photo by Stuart MacFarlane/Arsenal FC via Getty Images)

Arsenal have taken a step closer to finding much-needed balance in midfield as Lucas Torreira's move to Atletico Madrid is edging closer.

JoriPress understands the midfielder is to move to the Spanish side on loan, as first reported by The Athletic. Arsenal were in favour of a permanent deal but Atletico did not want to commit so the deal isn't likely to have an option to buy.

With the Gunners still in the hunt to sign Houssem Aouar from Lyon, moving the 24-year-old could prove crucial to getting Mikel Arteta's dream summer signing completed.

Their pursuit of the young French midfield has drawn out in public after Jean-Michel Aulas confirmed Arsenal's initial bid of £32million (€35million) was rejected last Saturday [September 26].

As revealed by football.london later that day, the Gunners were ready to increase their offer to £36.5million (€40million) with a further £9million in potential add-ons (€10million).

Since then, Aulas handed Arsenal an ultimatum stating that any player still at the club beyond Friday [October 2], would not be sold by Lyon.

Despite this, the Gunners received a further boost in regards to the potential of signing Aouar as the French side confirmed the signing of midfielder Lucas Paqueta, which could open the door to their current No.8. leaving.

As expected, he was asked about both Aouar and Torreira and although he stressed his confidence in the club, he remained coy on both issues.

"I am very confident with what we are trying to do internally," he said on Friday [October 2].

"The clarity and support that I am finding from everybody at the club to try to improve the team as we can, but most importantly, to get the right balance in the squad for now and the way we want to evolve the squad in the future.

"So, we are all very much aligned. I'm afraid I cannot give you any updates or news.

"I will give you an update with any player the moment I have an update to give you. At the moment, unfortunately there is nothing concrete."