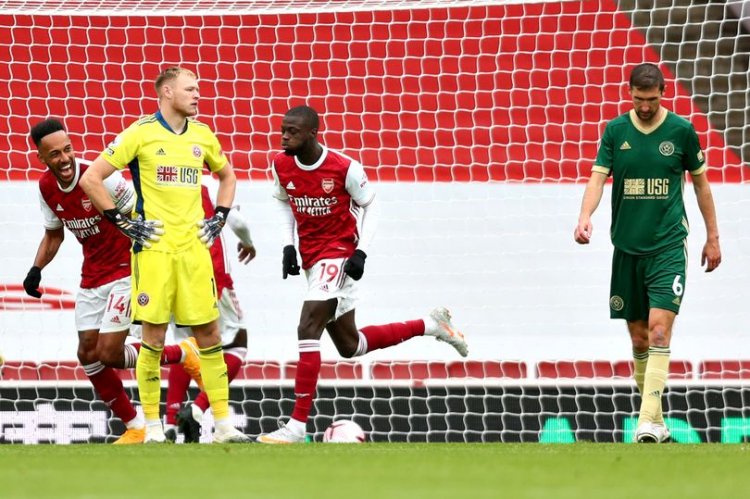 Nicolas Pepe's Arsenal career is yet to fully ignite since his club record move from Lille last summer.

The winger joined the Gunners in a deal worth £72 million, with the north London side beating off competition from clubs across Europe to secure his signature.

During his Arsenal career, Pepe has only been able to show flashes of his ability in games for Mikel Arteta after previously displaying his inconsistencies under former boss Unai Emery.

But Pepe scored Arsenal's second goal in the 2-1 win over Sheffield United last weekend before the international break, and will be hoping to impress Mikel Arteta even further when the season resumes.

Off the pitch, Arsenal legend Thierry Henry is someone who is well aware of the challenges that a young player faces when moving to England.

The former Gunners striker moved to north London in 1999 from Juventus, and despite going on to score 175 times in 258 Premier League appearances for the north London club, the Frenchman initially struggled to cope with the demands of the top flight.

Speaking to Yahoo Sport last year, Henry jumped to Pepe's defence and urged supporters to give the winger more time to adapt at the club.

"He needs to make sure he doesn't listen to that and go out and perform. People need to forget about the price tag. He didn't ask to be bought for that amount of money himself.

"It’s not always easy to arrive in a team, adapt to a new style of play. The Premier League, as we know, is not the same as the French League or any other league, by the way. So he needs to adapt to that. We need to give him time."

Henry's message was echoed by Tottenham head coach Jose Mourinho, who previously backed Pepe to be a key player for Arsenal in the right system.

"Last season after I left United, I went a few times to Lille because my friend is the coach there [Christophe Galtier] so I know quite a lot about his qualities," Mourinho said on Sky Sports at the beginning of last season.

"He does that very well. When he has the ball and also without the ball, he is very effective and very direct.

"The goals that he misses against Arsenal, he normally doesn’t miss it. He’s very cool in front of the keeper and I think this boy has fantastic potential.

"To play as they did last weekend against Liverpool, was out of his natural habitat.

"If they are to play three in midfield with him, Alexandre Lacazette and Pierre-Emerick Aubameyang at the front, looking to the movements, I think they can make it a real force."

Sky Sports pundit Graeme Souness echoed those sentiments, claiming fans were yet to see the best of Pepe.

"‘I still see a player in Nicolas Pepe," he recently wrote in a column for The Times.

"I’m hoping he has a big year because he’s not really grasped the intensity and physicality of the Premier League yet."