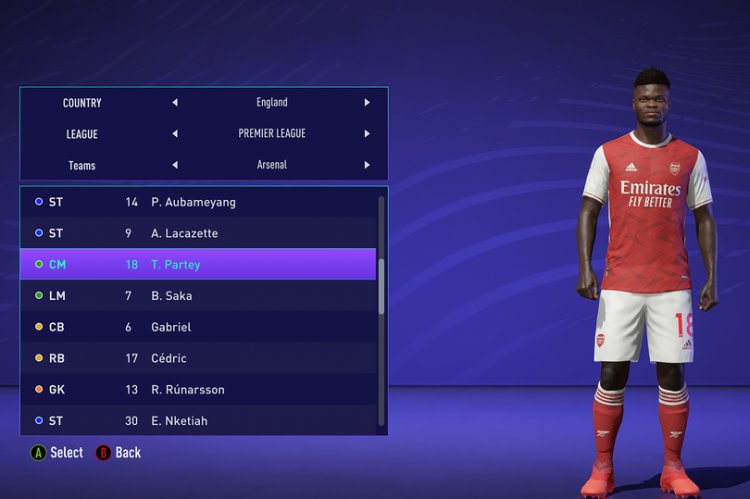 After completing a deadline day move to Arsenal, midfielder Thomas Partey has finally been added to the Gunners squad on FIFA 21.

FIFA 21 was released in the UK and worldwide on October 9, but Partey and other high-profile transferred players weren't added to their new clubs within the game, with fans having to do it manually through the club transfers option in settings.

But with EA completing a player database update for FIFA 21 on October 10, Partey has now been added to Mikel Arteta's squad on the game, and he's been given a nice upgrade too.

Here is how Thomas Partey rates on FIFA 21 as per the latest database update to the game (October 10).

As you can see from the picture below, Thomas Partey is now in Arsenal colours on FIFA 21, with the midfielder given an overall rating of 84.

He's rated as the third-best player at Arsenal by FIFA 21, with only Pierre-Emerick Aubameyang and Bernd Leno rated higher.

What do you make of Thomas Partey's rating on FIFA 21?

Additionally, fans who jump into FIFA 21 can also benefit from Dual Entitlement, enabling them to upgrade their copy of the game from PlayStation 4 to PlayStation 5, or Xbox One to Xbox Series X/S at no extra cost.

All progress made or content acquired within FIFA 21 Ultimate Team (including players, items, coins, FIFA Points, match record, and leaderboard placement), as well as all progression in VOLTA FOOTBALL will transfer over to PlayStation 5 or Xbox Series X/S.

Thierry Henry in agreement with Jose Mourinho and Graeme Souness about Nicolas P...

Peacock to stream USMNT and USWNT games in new deal