Apple has begun letting its iPhones carry out contact-tracing without the need for users to download an official Covid-19 app. 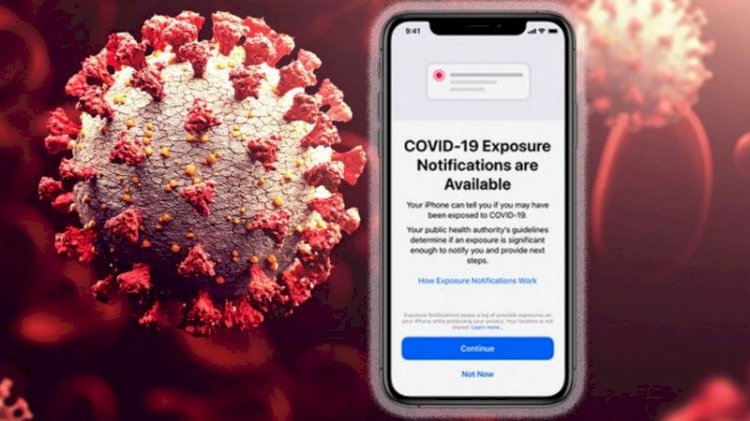 Apple/Getty
As an alternative, owners are being invited to opt in to a scheme called Exposure Notifications Express (ENE).
This keeps a 14-day log of other phones detected via Bluetooth and serves an alert if one or more of their users is later diagnosed to have the virus.
The local public health authority will determine what the notification says.
It might tell the user to download a more fully functional app for further guidance.
However, it also gives officials the option of not developing an app of their own, in which case the user could be directed to go to a testing centre or to call a hotline for more information.
IPhone owners who become ill without having received a warning message can still cause a cascade of alerts to be sent to others. But since they will not have an app to start the process, this will be done by tapping on a text message sent by the public health authority to their smartphone after a positive diagnosis.
The facility is being rolled out as part of the latest update to Apple's mobile operating system, iOS 13.7, which has just been released.

Users can opt into ENE via a new Exposure Notifications option within the iPhone's main Settings menu.
However, since it depends on health chiefs providing the criteria for which alerts should be generated - including how close two people need to have been together and for how long - it will not function without their involvement.
Until officials decide whether or not to support the initiative, users are being prompted to download a local app if one exists as an alternative or being told "exposure notifications have not been turned on your public health authority".
To date, more than 20 countries, provinces and other geographical regions have released apps based on Apple and Google's contact-tracing framework. They include:
England's NHS Test and Trace service is currently trialling an app based on the tech giants' API (application programming interface) too. And Scotland plans to release a product of its own later this month, based on the Republic of Ireland's.
However, only six of 57 US States and territories have currently adopted the technology. The launch of ENE may encourage more to do so as it can save development time and maintenance costs.
Whichever way Apple and Google's "decentralised" model is deployed, the authorities do not get to see which or how many users have received an alert.
Likewise, users do not get to see who it was that caused them to be served a notification.
In addition, users can back out of the new initiative at any time via a toggle in their settings menu.

Google will follow Apple with a parallel scheme of its own later this month for Android.
It will go by the same name, but rather than go down the app-less route, Google has opted to automatically create a basic coronavirus tracing app for public health authorities based on the criteria they provide.
Authorities that take advantage of this offer can still develop a more elaborate Covid-19 app of their own at a later stage if they so wish.
"Exposure Notifications Express provides another option for health authorities to supplement their existing contact-tracing operations with technology, without compromising on the project's core tenets of user privacy and security," Apple and Google said in a joint statement.
In theory this could be the moment that automated contact tracing takes off.
By putting what it calls Exposure Notification Express in an update to the operating system on millions of iPhones, Apple is removing a lot of friction from the process.
People who can't be bothered to install apps - or perhaps don't trust them - may be more inclined to simply switch on the system in their settings.
Another advantage is that the system should work across borders as long as countries opt into it so that they can mark phones as belonging to people who've tested positive.
But there is one real danger - that the system will leave many feeling both confused and suspicious.
Its workings are complex and it could appear to many people that they are being asked to trust the tech giant rather than their local health service.

‘Partey can offer Arsenal anger like Vieira & Gilberto’ – Traore in favour of At...

Climate benefits of killing gas stoves aren’t what you ...

A lot of fintechs “have to fix their business models,” ...

AI models spit out photos of real people and copyrighte...