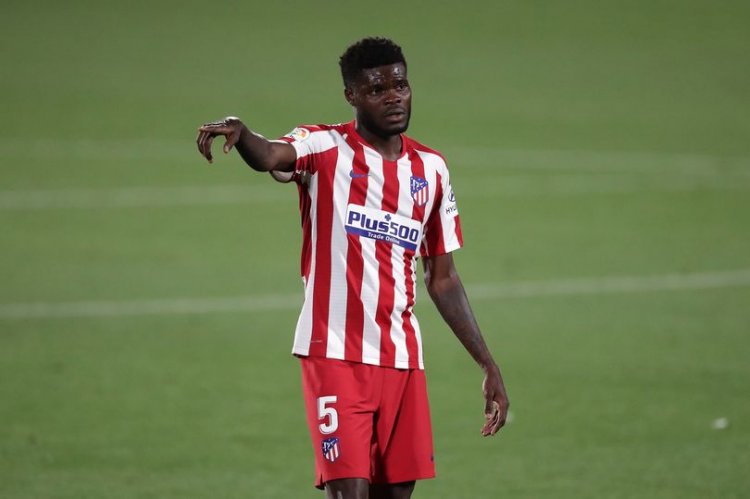 Thomas Partey will swap the red of Atletico Madrid for Arsenal

Arsenal have completed the signing of Thomas Partey after activating his £45million release clause in a remarkable coup for Mikel Arteta.

Partey has agreed a four year contract understood to be worth around £200,000-a-week with an option to be extended for a further season.

Arsenal made their move late in the window after Atletico Madrid refused to negotiate over any deal, insisting that the Gunners would have to pay up the full release clause in Partey's contract or find another player. After their move for Houssem Aouar hit the rocks Mikel Arteta and Edu opted to follow the Spanish club's advice and registered their intentions to submit the £45million payment at La Liga offices.

That effectively cut Atletico Madrid out of proceedings with the Spanish giants said to be surprised that Arsenal secured Partey at the 11th hour. Lucas Torreira's loan move in the opposite direction could help to soften the blow.

Partey had been at the top of Arsenal's wishlist throughout this summer and his decision to leave one of Europe's biggest clubs to join Arteta's side, who finished eighth in the Premier League, represents a huge coup for the manager and technical director Edu.

The prospect of moving to London, playing in the Premier League and working with Arteta all helped convince Partey to leave Atletico Madrid after eight years with the club. A significant increase on the £150,000-a-week salary they were prepared to offer will also have swayed him.

Partey's arrival comes as Torreira and Matteo Guendouzi depart the club, the latter joining Hertha Berlin on a season-long loan. The German side will not pay a fee but will cover his wages in their entirety.

Guendouzi's place has effectively been taken by Mohamed Elneny, who has featured regularly so far this season.

After Sunday's 2-1 win over Sheffield United and the collapse of Aouar talks Arteta had offered a notably optimistic and assertive view of Arsenal's ability to strengthen his club in the final hours of the transfer window.

"Believe me that the ownership, the board, myself, are doing everything we can to maximise the resources we have to improve the team and to sustain and keep the players that are in this club to make this club successful," he said. "I have 100% backing from them.

"It's not just words, it's reality. Whoever knows me, if it wasn't like that I wouldn't say it but I say it because I feel it and it's true.

"Whatever we can do, whether it's ourselves or the owner, they are willing to do it to support us, to back us, because I feel that they believe in what we are trying to do."