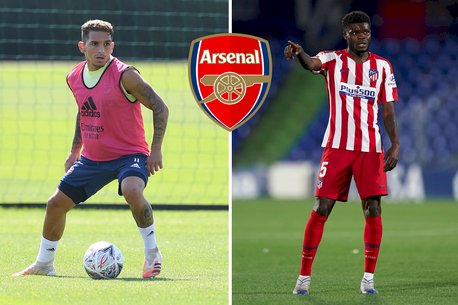 The Gunners are back in Premier League action tonight. After an impressive start to their 2020/21 campaign last weekend by beating Fulham 3-0, Mikel Arteta's men go again at home to West Ham United.

Summer signings Willian and Gabriel Magalhaes both impressed that afternoon, while Pierre-Emerick Aubameyang also scored again before penning a new contract in the week.

Arsenal's business won't stop there, either.

Atletico Madrid's Thomas Partey is a target, while Lyon's Houssem Aouar has also been linked with a move to the Emirates Stadium in recent weeks. There will be outgoings, too, with the likes of Sead Kolasinac, Sokratis and Lucas Torreira all linked with moves away from north London.

Every word from Arteta

Mikel Arteta spoke to the media yesterday ahead of tonight's game with West Ham.

There was plenty to recap as he spoke tonight's clash, transfers, injuries and much more.

Arsenal have taken a step closer to securing their replacement for Emi Martinez with Runar Alex Runarsson's move from Dijon edging closer.

JoriPress understands the goalkeeper has travelled to London to complete the deal. With the Premier League fixture against West Ham to play on Saturday an imminent announcement is unlikely but could take place in the next 48-72 hours.

Arsenal fans are reacting on social media to reports of Atletico Madrid being interested in signing Lucas Torreira.

According to Sport 890 - a publication in Uruguay - Diego Simeone has called the Gunners midfielder to tell him that he is wanted in the Spanish capital before the summer transfer window shuts next month.

Atletico Madrid's reported interest in the midfielder has certainly garnered a massive response from many Arsenal supporters who are suggesting a swap deal involving Thomas Partey.