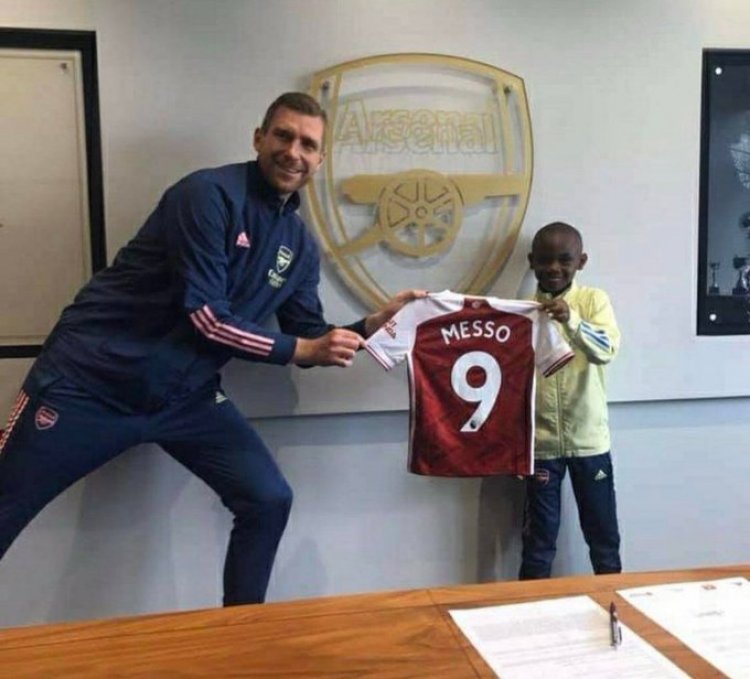 Arsenal's first signing of this summer's transfer window has been announced.

And it's a name not many fans will be too familiar with.

The Gunners have been linked with a number of players ahead of the summer window as manager Mikel Arteta looks to bolster his first-team squad for the 2021/22 season.

Moussa Dembele, Julian Brandt, Ryan Bertrand and Max Aarons are just some of the names being tipped to arrive at the Emirates Stadium at some point in the summer, while Arsenal are interested in a permanent deal for attacking midfielder Martin Odegaard after impressing on loan from Real Madrid.

However, whilst all those names would no doubt make the Gunners stronger, the player they have signed is one for the future.

Messo - whose name resembles that of Barcelona superstar Lionel Messi - is part of the latest scholarship intake at Hale End.

His family are from London/Essex, and Messo was previously on the books at West Ham United.

Below is a picture of Messo holding his Arsenal shirt alongside Academy manager Per Mertesacker with no.9 on the back which suggests the wonderkid is a promising centre-forward that could be one to watch out for in the future.

Messo is not likely to be the only new arrival at Arsenal this summer as Arteta has revealed he expects to be busy adding to the senior squad.

"Yes, if I have to answer to every question about every possible transfer or what players might be leaving we will be sitting here for hours," the Spaniard said during a press conference.

"What I can say is that we know what we want to do and there is a clear plan to put that together.

"It's true that there are a lot of decisions to make, because as well we have a lot of players on loan, some of them have to come back and we will see step-by-step and focus on the priorities that we have.

Seven players who could leave Arsenal on transfer deadl...