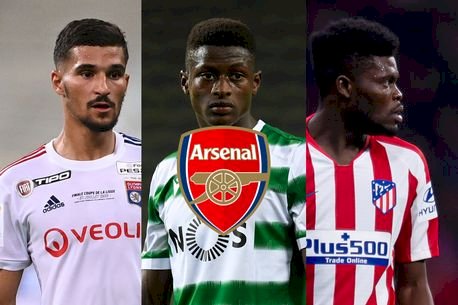 The Gunners have started the season in the perfect fashion, with a 3-0 win over Fulham on the opening day.

Next up, Mikel Arteta's side host West Ham United in the first league match of the season at the Emirates Stadium.

Off the pitch, Arsenal have enjoyed a good transfer window, with the likes of Willian and Gabriel joining.

But Arsenal are not done yet, with hope that another midfielder can be signed.

Transfer rumours continue to flood in for the north London-based club, and you can catch up with all of today's updates below.

This is the breaking news coming out of France.

Aouar may have played final game for Lyon

Houssem Aouar may have played his final game for Olympique Lyon.

Arsenal will aim to complete a £85million double transfer swoop for Lyon’s Houssem Aouar and Thomas Partey of Atletico Madrid before the end of the transfer window next month.

The Gunners have been heavily linked with both players in recent months, and according to a report by the Daily Express, Mikel Arteta is keen to add more new faces to his squad before the October 5 deadline.

Negotiations for Atletico Madrid star Partey were rumoured to have stalled earlier this month, over the La Liga giants’ refusal to accept any offers below his £45million release clause in the Spanish capital.

Lyon could push for a fee in the region of £40million for highly rated midfield playmaker Aouar, following his starring role in their Champions League campaign last month.

However, Arteta will need to sell players before he can bring in any new stars, with Matteo Guendouzi, Lucas Torreira and Sead Kolasinac all linked with exits.

Uruguayan international Torreira looks set for a loan move to Serie A club Torino, with back up goalkeeper Emiliano Martinez already completing a £20million switch to Aston Villa.

According to Icelandic outlet DV, Runar Alex Runarsson has had a medical ahead of his proposed move to Arsenal.

The Gunners are reportedly close to signing the Dijon goalkeeper as a replacement for Aston Villa-bound Emi Martinez.

The 25-year-old is set to sign a five-year contract with the Gunners after being identified by their recruitment team.

Runarsson was part of Iceland’s World Cup squad in 2018 and has also spent time in Denmark before he moved to France.

According to Sport BILD, Bayer Leverkusen will hold concrete talks this week with Sead Kolasinac.

Peter Bosz’s side want to sign the left-back in a permanent deal, and the player reportedly wants a return to Germany.

It is claimed Arsenal are asking for around €10milllion to sell the Bosnian.

Arsenal’s new 2020/21 home shirt has become the most in demand strip in the top four divisions of English football.

The Gunners have edged ahead of their rivals at the start of the new campaign in terms of kit sales, despite a massive 63% drop in demand for kits due to the ongoing financial impact from the coronavirus troubles.

Despite this huge reduction, Arsenal are leading the way in online and in store sales, according to data from Lovethesales.com, taking over from the 2019-20 leader, Liverpool.

Arsenal are interested in Portuguese attacker Marcos Paulo, according to TeamTalk, but are losing the race to West Ham United.

The 19-year-old plays for Fluminense, and has established himself as one of the most exciting young talents in the Brazilian top-flight.

However, the Gunners appear to be behind in the race, with the report claiming West Ham have made an official approach for Paulo.

The teenager, who is Brazilian by birth but has represented Portugal at youth level, is also a target for Leeds United, Watford and Southampton.

Speaking to Yorkshire Live, he said: “Yeah, we made an enquiry.

“That’s left with the CEO at our club and at Arsenal.

“We want attributes that suit us at the top of the club and hopefully move us forward.”

What Arteta and Edu said about Aubameyang

Mikel Arteta has highlighted the importance of getting Aubameyang to commit his future to the club.

“It was important for Pierre-Emerick to stay with us,” the Gunners boss told the club website. “He’s a superb player with an incredible mentality.”

As cited in the Metro, Lyon could hold out for a fee of around £55.5million, which Arsenal may struggle to pay unless they offload some of their current players.

Asked about the futures of both Aouar after Lyon’s loss to Montpellier, Lyon sporting director Juninho told Telefoot Chaine: “For now, there is nothing for these players.

Arsenal could be without a number of first team players for their first home game of the season this weekend.

The Gunners take on West Ham in a London derby at the Emirates, having got their campaign off to the perfect start with a 3-0 victory over Fulham on Saturday.

But they have injury concerns with eight players potentially sidelined.

Runar Alex Runarsson is said to be close to completing a switch to Arsenal.

According to DV, the goalkeeper underwent a medical ahead of his move to the Gunners on Monday.

It's expected the Dijon goalkeeper will sign for a fee of around £1.5million, signing a five-year deal worth £40,000 per week.

Runarsson is 25 years of age and a five-time Iceland international.

Houssem Aouar may have played his final game for Olympique Lyon.

Aouar has been heavily linked with a move to Arsenal this summer with a £50million deal mooted.

And as speculation intensifies, Aouar was sent off for Lyon in their clash with Montpellier last night.

As Montpellier defender Arnaud Souquet attempted to clear the ball from his own byline, Aouar came in with a challenge and his studs made contact across his opponent's shin.