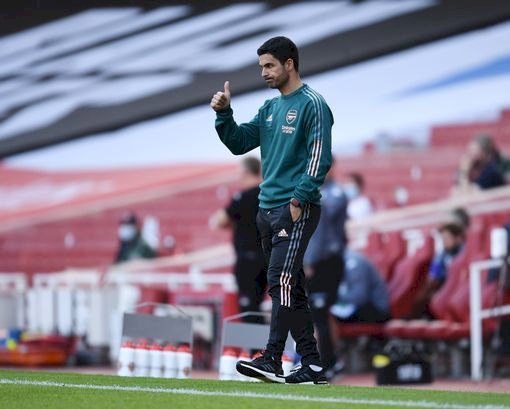 The Gunners' campaign officially began with their Community Shield victory over Liverpool at Wembley on August 29, but now Arteta and his side will embark on their first full season together.

Leading up to the game, the Spaniard received a promotion in regard to his job title. First appointed as head coach in December, his title now stands as 'first team manager' as he continues to work on developing the squad further with technical director Edu.

As well as having a focus on newly-promoted Fulham, Arteta is expected to be quizzed on the status of Pierre-Emerick Aubameyang's contract. The 31-year-old is expected to sign a new three-year deal with the club with his current contract expiring next summer.

The manager is also likely to be asked about signings Arsenal could potentially make in the latter stages of the transfer window. Deadline day stands at October 6 with Thomas Partey and Houssem Aouar emerging as top priorities in midfield.

Arteta on his players

“They want more, they are not satisfied. What we done doesn’t count for anything, it gives us confidence but this is a new competition.

“There’s a reason we were out of the Champions League spots.”

”I’m not going to discuss what happened internally.”

“We’re still active in the market. Active in players in and out, the squad balance is not what we want.

“We have to bare in mind the timings because clubs are acting in different ways. Number-wise, some positions are overbooked.

“Some positions, the specific qualities are still not there. It’ll be hard to do it in one window. It’s a constant evolution. You need a clear direction of what you want to achieve.”

“He’s really happy here. He wants to keep contributing to the team. He knows about the competition with the strikers here. The way he’s been training has been excellent.

Leno or Martinez to start?

“I don’t treat the goalkeeping position differently to any others. Whoever trains better starts. The other one [has] to push him as they did last season.”

“The situation with Freddie was clear about his ambition. He was very important, that left a gap. I had people in mind before I joined that I couldn’t bring in to improve key areas so that’s why.”

On Martinez to Villa speculation

“I cannot stop speculation. I don’t want to comment on any individuals without having the right answers.”

“All the players we have available will be treated the same way. They all put maximum effort in training and this is what I expect.”

On Martinez, Ozil and Guendouzi

“It’s very difficult to promise game time and it’s part of this period in the market.”

“I can say I’m even more confident that at the end of last season. I’m really optimistic.”

“The team is a good reflection of the coach. A very thorough person, the way they got promoted was really good. We know it’s a typical, tight stadium, it will be tough.”

On whether Willian and Gabriel could be involved

“They are adapting quickly, really good energy from both. [Gabriel] has huge potential to be influential for us.”

Arteta confirmed that Luiz and Sokratis will miss out.

“We have a few issues, that’s normal. It’s not ideal to have key players out but we have enough players and we will put the best plan to win.”

Arteta on his new role

“My title has changed but I’m just here to do my job. It’s nice to be recognised by the club but I just want to help the club do the right things and be the most successful in the country.”

“I get on very well with the Sporting Director (Edu),” Juninho told RMC Sport. “We spoke on the phone. Houssem Aouar is really well liked by Arteta.”

Elsewhere, it has been reported that Emiliano Martinez has already agreed personal terms with Aston Villa worth £60k-a-week ahead of a proposed £20m move.

According to the Independent, the Gunners have offered the Argentine stopper a significantly improved deal as they look to keep him at the club, where they want him to compete with Bernd Leno for the number one spot.

However, Martinez is seeking first-team assurances which have not been forthcoming and, with it stated Leno will make his return in tomorrow’s clash with Fulham, Arsenal are reluctantly set to agree to a sale.

Edu also spoke to James Benge about how Arsenal are approaching the rest of the transfer window.

Now that all the injury madness is out the way, here's some more from James Benge's chat with Edu yesterday.

He touched on why Mesut Ozil hasn't featured under Mikel Arteta recently and whether he can work his way back into the side.

This summer has seen a lot of change in regard to the structure at Arsenal. The latest change has come in the change of Mikel Arteta's job title from head coach to first team manager.

James Benge had the chance to discuss these changes with Edu and Vinai Venkatesham to get a deeper understanding for the reasons behind the change.

Some fresh injury news from Arsenal this morning regarding Pablo Mari and Gabriel Martinelli.

Where to find Sheffield Wednesday vs. Newcastle on US TV