Manchester City have signed 23-year-old defender Ruben Dias from Benfica on a six-year deal for about £65m. 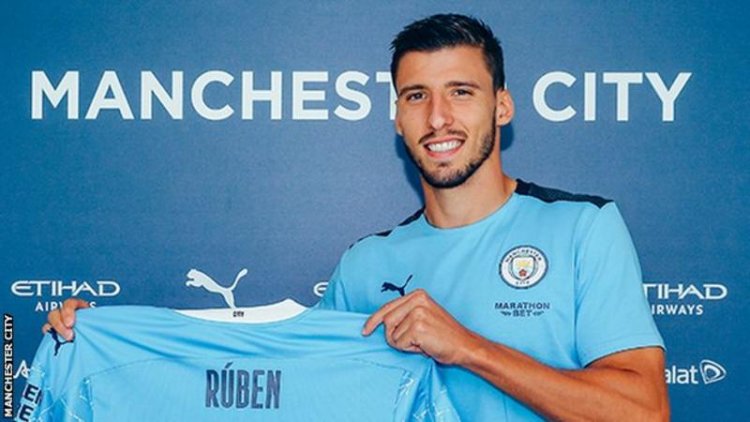 Dias has won 19 caps for Portugal

Argentine centre-back Nicolas Otamendi has moved the other way for £13.7m.

"To have the opportunity to join a club like Manchester City is a fantastic opportunity for me and one I couldn't turn down," said Dias.

"Their success speaks for itself. They have been the dominant team in England over the last few years, playing an attacking brand of football which I feel suits my own game.

"It is really exciting to be part of such a talented squad and to play for a world class manager like Pep Guardiola, who has a proven track record of developing young players like myself."

Portugal international Dias graduated from the Benfica academy before making 113 senior appearances, and winning the Portuguese title in 2018-19.

He has also won 19 caps for Portugal and he will bolster the City defence, which conceded five goals in their recent defeat to Leicester City.

Dias has been heavily linked with a move to Arsenal in recent years, but he completes Guardiola's search for a right-sided central defender.

He is being touted as Vincent Kompany's replacement, with Guardiola opting to utilise Fernandinho as a central defender last season following the influential Belgian's departure.

Although City are paying more than the £60m release clause which existed in Dias' previous contract, it is less than the £80m he has in the current one, which he signed in November 2019.

"Ruben is a player we have admired for some time and we have been impressed with how he has progressed at Benfica," said City's director of football Txiki Begiristain.

"He has developed into a real leader and as a defender, he has all the attributes we are looking for. He is strong in the air, good in one-v-one situations and technically, he is very good, so we are confident he can thrive in our system."