Mikel Arteta is clear about what he needs at Arsenal. (Photo by Stuart MacFarlane/Arsenal FC via Getty Images)

Almost as soon as Mikel Arteta began Arsenal’s post-restart matches with a three at the back the prevailing assumption was that this was a temporary patch for a defence that needed as much bulking up as possible.

It is an understandable view to have. Most head coaches would prefer to be able to pack their team with more attacking talent and just enough defenders that they can keep a clean sheet. 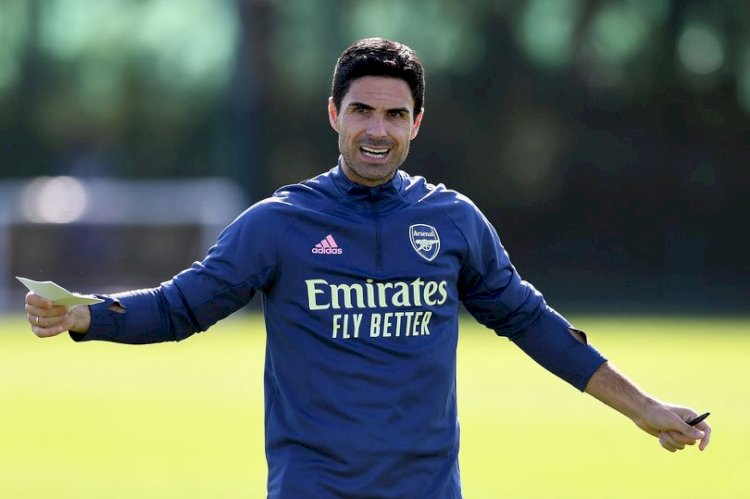 Arteta himself began his tenure with a four man defence and still brought the solidity that Arsenal craved. In the 15 matches between his dugout debut and his COVID-19 diagnosis the Gunners conceded just 12 goals. In the same span before his appointment they let in 28.

Equally then that begs the question why Arteta felt the need to adjust his side from the 4-2-3-1 that was their default on his appointment to the 3-4-3 that they used for much of the run in. A belated option to compensate for injuries and red cards against Manchester City and Brighton soon became the starting point for Arsenal and a successful one at that.

There must have been more benefit to moving to a back three than simply shoring up the defence, as has been widely assumed.

New seasons tend to see head coaches set out their stall for how they want to approach the year ahead. Principles will be compromised when the harsh reality of the coming months dawns but the friendly matches now are a chance for any head coach to drill his side on the way he wants to play.

It has been notable then that there has been no abandonment of the back three. When William Saliba made his first appearance in an Arsenal shirt he did so to the right of a three man defence anchored by Rob Holding, when the Gunners returned to Wembley to face Liverpool in the Community Shield Arteta deployed a trio of Holding, David Luiz and Kieran Tierney.

Such a system seems to be overly cautious on paper but there was little about the free-flowing build-up to Pierre-Emerick Aubameyang’s goal in the latter game that reflected that on the pitch.

When such a system has the fluidity to allow the Gunners to shut up shop against the likes of Manchester City and Liverpool whilst also bringing football that is altogether more easy on the eye when Arteta’s side cut loose why should there be such a rush to declare it null and void?

Certainly in the transition between defence and attack it has been hugely effective and undoubtedly intriguing. Indeed so versatile is his approach to systems that it almost feels null to perceive of Arteta’s Arsenal as having one set shape.

In defence they may well drop to a three man system with wing-backs patrolling ahead but in attack the Gunners move forward rather like a team with a bank of four would. At their most confident Arsenal can operate with something not dissimilar to a 3-3-4 or 2-3-5, pushing one wing-back extremely high up the pitch whilst the other drops into midfield.

On occasions we have even seen at least one of the back three advance high up the pitch into midfield with one or both wing-backs bombing on. Crucial to this is how Arsenal set themselves out down the left flank.

It has been the tale of Arteta’s reign that he has been laser focused on that one particular side of Arsenal’s system. When the new head coach was appointed Bukayo Saka was filling in, reluctantly but ably one might add, as a left-sided defender.

A slight tweak to one player brought Saka to even greater heights. By instructing Granit Xhaka to drop back and function as something akin to a left-sided centre-back the No.77 was able to bomb forward and play the role of winger that he is more accustomed to.

As Xhaka took Saka’s place so was Pierre-Emerick Aubameyang free to move infield. At its best moments this was an explosive attacking plan, typified in a 4-0 win over Newcastle where the young left-back provided an assist and won the man of the match award.

In the image above Saka collects the ball with room to advance or to give and go with Mesut Ozil. Inevitably right-backs will gravitate towards Aubameyang even when he drifts into more central areas, meaning that if Arsenal's left-back can beat his winger he can find himself attacking a disorganised defence.

Successful as that approach was it was clear Arteta had another vision in mind, such was his desire to add a left-footed option to central defence. He now has not one but two in Pablo Mari and Gabriel Magalhaes with Kieran Tierney having proven at the very least that he can play on the left of a three man defence.

Mari’s brief sojourn in the Arsenal backline - he started three games but was forced off early in the defeat to Manchester City with a season-ending ankle injury - offered one indication of how Arteta might approach a back four now that he has the balance he wants with his centre-backs.

Mikel Arteta already has the answer to Arsenal's centre...