Gabriel is the solution to Arsenal's long-standing problem, but he must learn from Man City loss

The Brazilian has quickly impressed since joining Arsenal from Lille in the summer, although he was culpable for Sergio Aguero's goal as the Gunners lost out against Manchester City 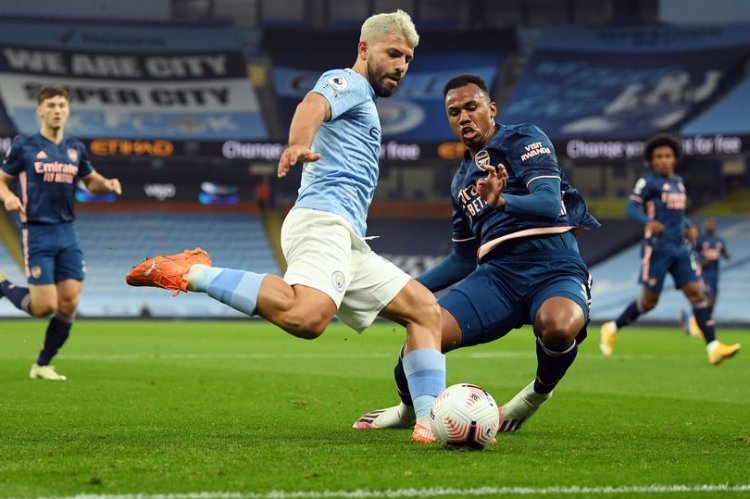 It’s certainly not unfair to suggest Gabriel has made a strong first impression at Arsenal.

The Brazilian defender joined the Gunners from Lille this summer, and by the end of September was collecting his first player of the month award.

Since his arrival, the 22-year-old has been tasked with improving an Arsenal defence that has faced heavy scrutiny across the last few seasons. The next step on that road to redemption was a trip to Manchester City.

This would be by far the biggest test of Gabriel’s early Arsenal career, although the Gunners could be buoyed by the fact they celebrated a 2-0 win against Pep Guardiola’s side in the FA Cup as recently as July.

Gabriel was tasked with marshalling Sergio Aguero, and rarely did the 22-year-old let his man have a free second. Sensing there was little joy to be had against the summer arrival, Aguero flitted between him and compatriot David Luiz.

Luiz has often been maligned for his lack of concentration, but he also performed well. Things were all going so smoothly, and then in the space of one moment, the cagey nature of the opening 20 minutes was shattered by a piece of quality.

Gabriel followed Aguero into the centre circle and pressed him as he received the ball into feet. A quick lay off from Aguero made it seem like the danger was over, but as Gabriel began jogging back to goal his path diverged away from Aguero.

No one picked up the Argentine in the middle, and that allowed him to receive a pass just inside the Arsenal half. He quickly drove past Dani Ceballos and now the Gunners backline was running towards its own goal.

A pass to Phil Foden was followed by a smart touch inside from the English youngster. His shot eventually fell to the feet of Raheem Sterling and he calmly converted.

It was a harsh reminder about the fine margins with which these games can often be decided, and the rest of the match tumbled towards an end without any great deal of excitement attached to proceedings.

There is a case to be made that Gabriel could have tracked Aguero, although it was a failure of the team rather than an individual mistake as the Brazilian was trying to get back into position.

At the other end, Arteta was annoyed not to get a penalty for Kyle Walker’s high-boot on Gabriel, with the player definitely representing an attacking threat from set-pieces.

“That has to be checked,” he told Sky Sports.

“They said that they checked, and I said, ‘How the hell have you checked if you took two seconds to check that action?’. Obviously, there is something there.”

Overall, the 22-year-old can be pleased with his performance. He completed the most passes of any Arsenal player on the field, was third for ball recoveries, joint-second for interceptions, and first for blocks (Statszone).

That may seem like only a small crumb of comfort given the result, but this is a process for Arsenal. If they can keep moving in this direction, then both Gabriel and the Gunners will be set for success.

Get Paramount+ free for 1 month

Mikel Arteta already has the answer to Arsenal's centre...