All the latest Arsenal transfer news, views and rumours 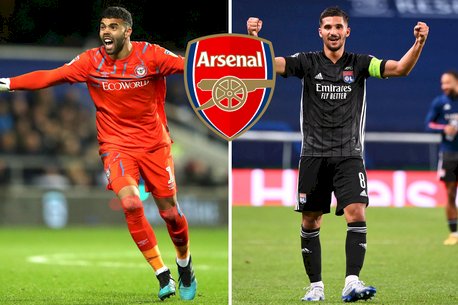 After an impressive end to the Premier League season under Mikel Arteta, the Gunners have continued that into the summer and the start of the 2020/21 campaign.

Permanent signings have included Willian and Gabriel Magalhaes, while Dani Ceballos has rejoined for another season on loan - with Pierre-Emerick Aubameyang also penning a new deal at the club.

But Arsenal aren't done yet.

Atletico Madrid's Thomas Partey is a target, while Lyon's Houssem Aouar has also been linked with a move to the Emirates Stadium in recent weeks. There will be outgoings, too, with the likes of Sead Kolasinac, Sokratis, and Lucas Torreira all linked with moves away from north London.

What would Arsenal’s best starting XI look like if Houssem Aouar joins?

Arsenal have suffered a blow in their bid to replace Emiliano Martinez after a £10million bid for Brentford goalkeeper David Raya was rejected, according to reports.

The Gunners are keen to sign a new back-up shot-stopper to compete with Bernd Leno after sanctioning the £20million sale of Martinez.

The Argentine had impressed at the end of the 2019/20 season with Leno out injured which heightened his desire for regular first-team football.

How Houssem Aouar can get his dream Arsenal shirt number

Judging by the last two seasons and Aouar's history with the France U21's, his dream shirt number is '8' and it's unlikely he will get that at Arsenal given Ceballos has only recently rejoined the club.

However, the Spaniard is only on loan from Real Madrid and there's no guarantee he will sign on a permanent basis at the end of the campaign.

This means Aoaur could receive his favoured number if he's patient enough to wait a year or if Ceballos decides to relinquish his current shirt.

Edu closes in on sixth signing

Arsenal have efficiently gone about their business in the summer transfer window.

As many as five major deals have been completed by the north London outfit thus far.

Two of which were already confirmed before last season concluded as Pablo Mari and Cedric Soares' loan deals were officially made permanent when the summer window opened.

That was followed up with the signing of Willian on a free transfer after his contract expired at London rivals Chelsea.

Signing number four came in the shape of Gabriel Magalhaes from Ligue 1 outfit Lille for a reported £25m fee and the central defender had a debut to remember against Fulham last weekend. Meanwhile, Dani Ceballos is back at the Emirates Stadium on another season-long loan deal from Real Madrid.

Even with those names, Arsenal aren't done yet. Dijon's Runar Alex Runarsson has emerged as a surprise name to replace Martinez, as has Brentford's David Raya. And it appears that Arsenal have decided on a move for the latter, with the goalkeeper reportedly agreeing a five-year deal with the Gunners

Arsenal are ready to launch their first bid for Lyon midfielder Aouar, a report by TEAMtalk claims.

Aouar is being heavily linked with a move to North London as the Gunners aim to strengthen their midfield options before the window closes in a little over two weeks time.

It has been reported that Aouar "would like" to seal a move to the Emirates Stadium and test himself in the Premier League.

It is reported that the Gunners are now ready to lodge their first official bid for the 22-year-old, with Arsenal ready to make an opening offer of £36million.