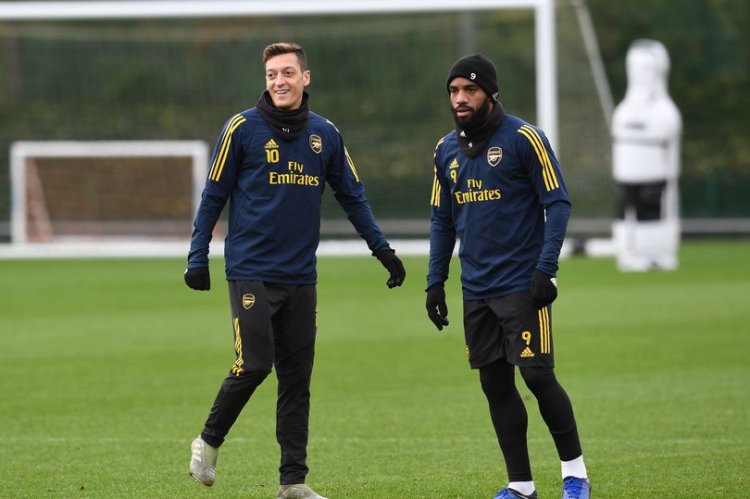 The 29-year-old started the season with three goals in as many Premier League games against Fulham, West Ham United, and Liverpool, but hasn't found the net since opening the scoring at Anfield in late September.

That's five games without a goal across all competitions for Lacazette and he's not had much luck finding the target in Arsenal's final training session before facing Aston Villa on Sunday night.

head of the game at the Emirates Stadium the likes of Gabriel Magalhaes, Pierre-Emerick Aubameyang, William Saliba, Calum Chambers, and Thomas Partey were put through their paces at the club's London Colney training base.

Throughout the session, Mesut Ozil was at his creative best. He claimed assists for Hector Bellerin and Saliba, and also had one chalked off after Chambers was adjudged to have been in an offside position before putting the ball in the back of the net.

And the playmaker was denied another assist by Lacazette.

As spotted in a behind the scenes of Arsenal's training session video uploaded to YouTube, at around the 4.40-minute mark, the German cuts the ball back for the Frenchman.

However, with just the goalkeeper to beat, Lacazette's dinked effort hits the crossbar and goes over.

The striker turns away looking rather disappointed with his effort as Ozil watches on - perhaps in amazement that his pass wasn't converted into a goal.

Interestingly, Ozil's last appearance for Arsenal saw him register an assist for Lacazette in the 1-0 win over West Ham United all the way back in March.

That may turn out to be his final outing for the Gunners as he's not been included in the Premier League or Europa League squads this season.

However, in a lengthy statement released on his social media last month, the attacking midfielder has vowed to train as best as he can as he looks to work his way back into Arteta's plans.

It remains to be seen if that happens, but Ozil's attitude in training since the squad announcements has been upbeat.

Earlier in the week he uploaded two videos onto his Instagram account of him doing some gym work, and the Gunners no.10 had a simple two-word message to share.

Arsenal fans spot what happened to Matteo Guendouzi after making his first Herth...

Your defence is in trouble

Where to find Real Betis vs. Barcelona on US TV