How Arsenal beat a European heavyweight to the signing of Pepe 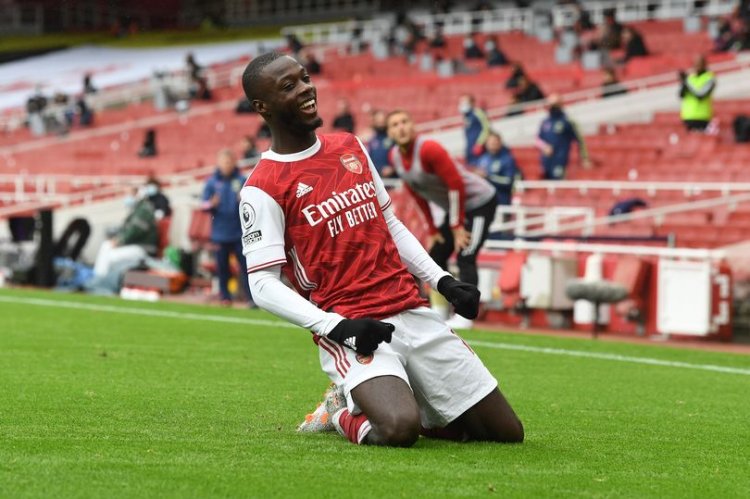 A year on from Arsenal's club record signing of Nicolas Pepe from Lille, the murmurs that the Gunners 'overpaid' for the Ivorian winger can still be heard.

The 25-year-old joined after scoring 23 goals and providing 12 assists in 41 games for the Ligue 1 side, but struggled to impact games for the bulk of last season.

However, JoriPress has uncovered how negotiations and a friendship with Lille owner Gerard Lopez saved the club over £10m, with Italian giants Napoli making a bid in excess of £85m - excluding performance bonuses which would have taken the fee even higher.

Lopez recently revealed that Arsenal pulled off a coup and it was Pepe's entourage which made sure that he would go on to become a Gunners player, despite the higher offer from Napoli.

“No, Arsenal did one hell of a deal,” he told talkSPORT host Jim White.

“It was Pepe’s management team that asked us to go to Arsenal and so we accepted slightly less money than we would have got somewhere else.

“Some people know that, I know publicly some agents have said that but something that needs to go on record – we didn’t sell him to the highest bidder.”

Reports also suggested super-agent Jorge Mendes was 'hired' by Arsenal as they looked to fast-track the signing of Pepe, but JoriPress understands that the Portuguese was in fact working on behalf of the French side and played a minimal role in the deal.

The Arsenal ownership were kept abreast of the club's pursuit to sign Pepe with both Edu and former head of football Raul Sanllehi having meetings with the Kroenkes during the club's pre-season tour and trip to Los Angeles in the summer of 2019.

A two day meeting between Arsenal officials and Lille representatives helped smooth over the deal which was agreed in staggered payments. As is the case with most big-money transfer deals, the Gunners will pay Lille in yearly instalments with the first transaction at £10million last summer.

Indeed, Napoli's interest in Pepe was no surprise as they are considered almost an equivalent to Arsenal in terms of financial firepower and pull on the transfer market. The Serie A giants were also heavily interested in Bernd Leno and Lucas Torreira before the duo arrived in north London two years ago, and were close to signing Gabriel before he moved from Lille to Arsenal - a move that the Brazilian youngster made on Pepe's recommendation.

Napoli's financial power was shown this summer when they signed Nigerian forward Victor Osimhen from Lille for a reported $96m, which would make him Africa's most expensive player of all time.

“I watched him [Pepe] throughout the season, every time he gets the ball something happens," said Lopez.

"He’s very tough to stop, especially when he’s in the last 30 or 40 metres. You either have to foul him or he’s going to make a pass or create a goal opportunity. That kind of talent is very rare. Players who on their own can dismantle or make something happen.

“I wasn’t kidding when I said Arsenal got a good deal. Other people were willing to pay more and if he delivers, he can deliver, he can be a player who will be key to them finishing higher up the table.”

Enquiries were also made for Crystal Palace winger that summer Wilfried Zaha but the south London side set an eye-watering asking price of £100million for the Ivorian, who was said to be left disappointed that a move didn't come to fruition.

That summer prompted Arsenal to identify the areas they needed to strengthen. Gabriel Martinelli bolstered the frontline while Dani Ceballos came in on loan from Real Madrid - both relatively simple deals to complete.

Kieran Tierney joined from Celtic after protracted negotiations while William Saliba was earmarked as one of the most exciting defensive prospects in Europe, arriving at the club for a fee of £28m.

It was the transfer of David Luiz which raised eyebrows among many. Arsenal needed a centre back and the Brazilian was desperate to leave Chelsea due to what JoriPress have been told a 'fractious' relationship with manager Frank Lampard. The 33-year-old wanted to stay in London and it's understood that he took a pay-cut to make the move across south west London.

Despite questions being asked about Arsenal's transfer business over the last year, particularly the Pepe deal, JoriPress understands that there was widespread agreement among those who identified the player that he was by far the best option to bring in due to his relatively young age and room to increase his market value over the next three to four years.

Those who have seen Pepe flourish in France believe he will eventually come good including Arsenal boss Arteta who insists that the player is now settled after a difficult first season in which the management changed throughout the club.

"He is very settled here, he is liked by the boys, he is a really good character to have around and I'm really positive we are going to have him for many years and that he can perform at a really high level consistently."

For Pepe, his stunning solo effort against Sheffield United provides a taste of what is yet to come and it will only be a matter of time before the Ivorian is fulfilling the weighty expectations put on his shoulders after becoming Arsenal's club record signing.

'Kepa brought him out of retirement!' - Chelsea fans in meltdown over Petr Cech ...

Mikel Arteta names the one reason why Arsenal lost agai...

Potter says Pulisic will not be sold during transfer wi...