Summer signing Thomas Partey shone in Arsenal's win over Manchester United at Old Trafford, with the Ghanaian international putting in another fine display after his move from Atletico Madrid 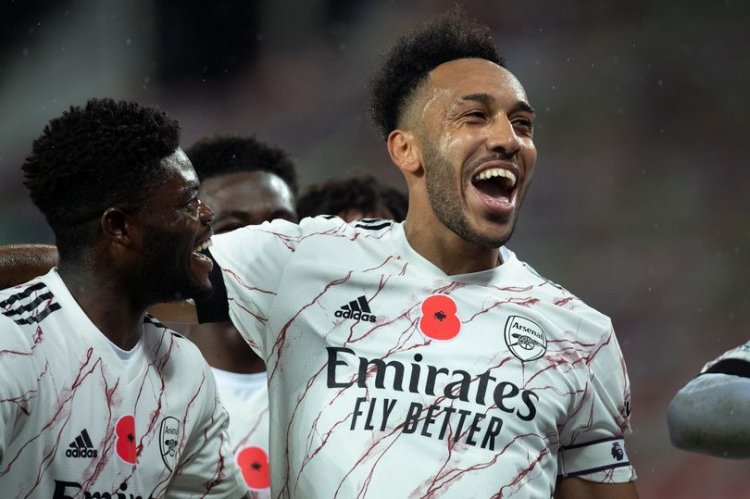 The Gunners overcame Manchester United 1-0 with Aubameyang scoring the winning goal from the penalty spot.

Yet it was recent signing Partey's display that won a lot of plaudits as he put in a dominant display in a midfield that was actually outnumbered by the hosts' ineffective diamond formation.

Aubameyang has now delighted fans by posting a picture of him and Alexandre Lacazette celebrating with a reference to new teammate Partey.

He said: "Just me, my boy and the guys enjoying the Partey tonight."

The former Manchester United midfielder compared Partey to his old foe Patrick Vieira and said he wished the 27-year-old had moved to Old Trafford instead.

Keane said: "We said before the game, this guy is no mug, he’s played at big clubs, in big competitions and we saw it today.

"When you watch a player live - that’s when you can judge a player. The more I look at him, I wish he was in Man United’s midfield; big, strong and aggressive.

"I go back to my battles with Patrick Vieira, I think this kid’s got a chance of matching what Patrick used to do because he’s big, he’s strong, he’s aggressive, and he likes to pass a football forward.

"He can deal with the ball, he looks comfortable on the ball - just little details - a bit of composure, good first touch and retaining possession, that’s the aim of the game."

Partey also earned praise from his manager Mikel Arteta, who was also impressed with his performance up against Ole Gunnar Solskjaer's men.

Gary Neville names Arsenal's best player against Man United - and it's not Thoma...

What Alexandre Lacazette did after being substituted fo...