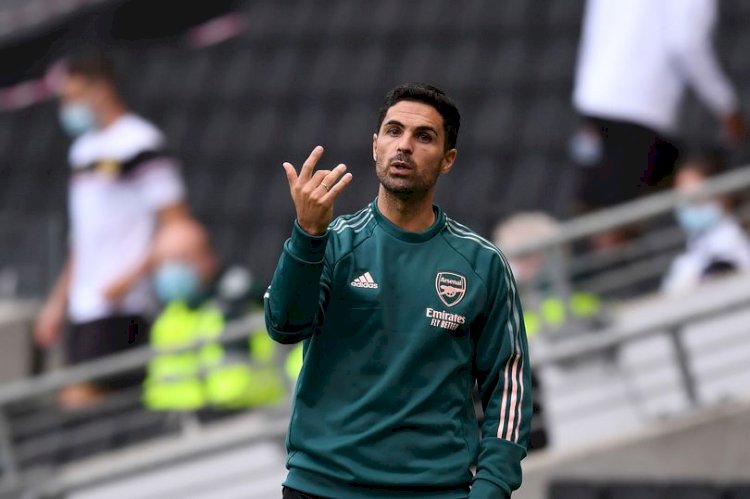 Mikel Arteta is confident Arsenal can achieve their transfer ambitions before the October 6 deadline. (Image: Photo by Stuart MacFarlane/Arsenal FC via Getty Images)

A fortnight before the transfer window closes and there is work to be done honing Mikel Arteta's squad yet it is work that will be carried out with no clarity over what Arsenal's short-term financial picture looks like.

Arteta made no secret of his desire to rebalance his squad further ahead of Saturday's 2-1 win over West Ham, a match in which his midfield could have used both the guile of Houssem Aouar and the dynamism of Thomas Partey. Arsenal, their manager said, need to" adjust the squad in the most efficient way."

A new goalkeeper has been secured in Runar Alex Runarsson, who has completed his medical ahead of a £1million from Dijon that is due to be announced imminently. Though Arsenal remain interested in David Raya, Brentford's reluctance to sell means the Icelander is currently set to fill the gap left by Emiliano Martinez's £20million sale to Aston Villa.

If current third-choice Matt Macey also moves on then Arsenal wil enter the goalkeeping market with renewed purpose but a key factor in selling Martinez was funding moves elsewhere.

Arteta wants at least one midfielder added to his squad before the window closes on October 5. None of his primary targets come cheap with Atletico Madrid demanding the £46million release clause of Partey paid in full if they are to part ways with the combative midfielder and Lyon charging a similarly high price for Aouar.

Selling further players to fund the acquisiton of these new midfielders is proving to be challenging. football.london understands that Arsenal have made no progress in their attempts to cash in on Matteo Guendouzi, who is still of interest to Paris Saint-Germain among others.

Meanwhile Lucas Torreira has drawn further interest from Atletico Madrid along with Torina. However Arsenal want to sell and they are faced with a string of loan offers, some of which include mandatory purchase clauses.

Arsenal would not be averse to spending money now from any Torreira commitment even if the prospective suitor does not pay up until the summer of 2021 though they would naturally prefer a more immediate deal.

The club hierarchy have indicated that they do not necessarily need to sell to buy but it would be prudent both financially and in terms of handing Arteta a manageable squad for numbers to be kept within control.

Financing much of that spending through sales has been the primary plan since the £25million investment in Gabriel and the importance of balancing the books has been reaffirmed in recent weeks. A club that is more reliant on matchday revenue than the vast majority of its contemporaries is facing up to further questions over when fans can return to the Emirates Stadium.

Every game without a full stadium is £3.2million lost for Arsenal, according to Reach research. Of their total revenue each season 24% comes from matchdays.

Arsenal's current plan is to bring around 15,000 supporters back to N5 for the visit of Sheffield United on October 3 though, like so many organisations in so many sectors, they will be bracing themselves for prime minister Boris Johnson's announcement over further measures to restrict the spread of COVID-19 in the UK.

Even though Arsenal and the rest of the Premier League are confident that they have proven themselves to be sufficiently biosecure to continue playing through the current surge in cases recent spikes threaten to knock back the return of fans to stadia and with it ask further questions of club finances. These will be felt keenly indeed in lower leagues but no club is inured to its impact.

That was clear in the latest analysis of the club's financial position by the Arsenal Supporters' Trust (AST). They note that a club that would have earned £92million last season on matchdays were it not for the suspension of football and its resumption behind closed doors may now only get £20million for the 2020/21 campaign.

That is contingent on some number of supporters returning at the start of next month, a set of circumstances that look harder to envisage with the number of coronavirus cases doubling every seven to eight days.

The current climate means the AST estimate that Arsenal could face a loss of £80million next season despite the club's attempts, through redundancies and pay cuts for senior staff, to lessen its cost base.

This is the situation in which Arsenal are working towards deals that would rank among the most significant outlays the club have ever made. Many have asked, particularly when 55 staff were made redundant as Willian put the finishing touches on his three year contract, why the club are so determined to invest in their playing squad at a time when funds are scarce.

It is a question that the midfielders who took pay cuts might also ask if they find their opportunities to develop are limited by Aouar or Partey.

Vinai Venkatesham offered a convincing view as to why now is the time for Arsenal to carry out what is effectively capital investment in footballing terms.

"We need to make sure that we are looking after the long term health of this football club and, like any organisation, that means that you need to invest," he said earlier this month. "If you work for an airline then you need to buy new planes. If you are working at a restaurant you need to invest in the restaurant.

"Here, we need to invest in the team and that’s what we’re doing. We’re investing in players because we want to be successful as we possibly can be."

That goes some way to explaining why in such trying times Arsenal are ready to back Arteta in the transfer window as much as possible. It should not be taken as a guarantee that Aouar and Partey are coming. If nothing else technical director Edu and his recruitment team have alternative options in midfield, including Amadou Diawara of Roma.

The plodding win over West Ham showed a need to strenghten in midfield - much of Arsenal's best attacking moves came down the left even after the late withdrawal of Kieran Tierney - but the weeks before have shown how far Arteta can take this squad if it is honed.

Tougher tests will come than Arsenal's two opening fixtures but in those games they have shown an ability to win ugly and with more grace and style. There is reason to believe that under Arteta this club can get back into the Champions League.

If they do that and access the financial bounty that comes with a seat at Europe's top table then the speculating of this summer will have accumulated the desired rewards. Shrewd investment in the coming fortnight could reap rich rewards.