Nicolas Pepe impressed for Arsenal as the Gunners brushed aside Dundalk in the Europa League, and Mikel Arteta wants more of the same from the Ivorian winger 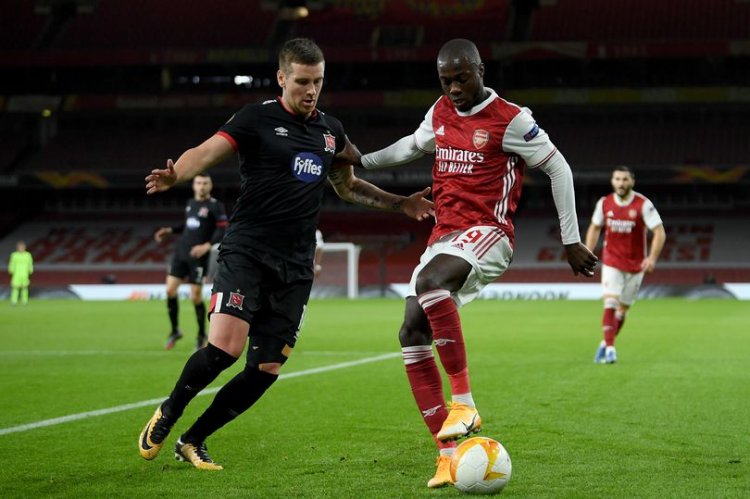 It was a good night for Arsenal and Nicolas Pepe as the Gunners ran out 3-0 winners against Dundalk.

Pepe scored the third goal for Arsenal as they recorded a comfortable win in the Europa League group stage, brushing aside their opponents from the League of Ireland Premier Division for a second victory in the competition.

The Ivorian showed plenty of promise and scored with a superb strike as he notched his second goal in ten appearances this season - and 10th since joining the Gunners in a club-record deal in the summer of 2019.

Arsenal head coach Mikel Arteta was full of praise for the 25-year-old after the game, but said he wants more of the same from the former Lille star as the Gunners now turn their attention to a trip to Old Trafford to face Manchester United this weekend.

And Arteta insists that the price tag is not an issue for Pepe as he strives for more consistency in his performances.

I think he's so willing to do well and show everybody - first of all, his team-mates and myself - and also the fans that he is a player that can make the difference every week," he said, speaking in his post-match press conference.

"Obviously, he's not been first choice in a lot of the games at the moment but, to be fair, he's played quite a lot of the moments, some better than others. It's about finding the consistency. Not through the games, but during the games as well to be most instinctive and to be able to do the right things in many, many occasions where he has to make the right decisions on the pitch.

"It's nothing to do with his attitude. He's a player who takes risks. He's a very creative player and this is the most difficult thing in football, when they all know what you can do as well and how much they want to prevent your space and the overloads that they generate to defend you as well.

"So to create situations for them is complicated, but sometimes it's the simple things: the deliveries, the amount of situations he is able to create or attract and then make the right decision to keep evolving that final ball, the finishing, the positioning inside the box which he has to be more consistent at. We are working on that and hopefully he will be doing that much more efficiently.

"Knowing Nico and after speaking to him, I don't think it [the price tag] is something that worries him too much. It's about him hitting his best every single week. I think this is where he believes he can do better and we have to try to help him."

USMNT and USWNT commentators for TNT and HBO Max

How to place a Same Game Parlay on Dallas Cowboys at Sa...