Mikel Arteta is putting his vision for Nicolas Pepe's Arsenal rise into action, answers about Ozil and more 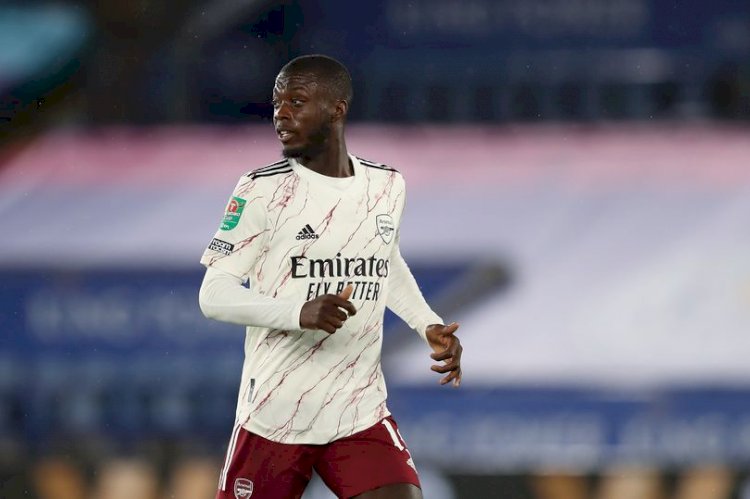 Mikel Arteta's Arsenal are up and running and though a 2-0 win over Leicester City's reserves is hardly going to live long in the memory of supporters it ought not to go unappreciated that the Gunners have just won at a ground where they have had plenty of trouble in recent years.

For the most part Arteta's side did not look that troubled on their way to an EFL Cup fourth round tie with either Lincoln or Liverpool, overcoming a brief flurry of pressure from James Maddison and company just before the interval, after which their quality told.

Nicolas Pepe's powerful run culminated in Christian Fuchs turning the ball into his own net early in the second half with Eddie Nketiah striking late to secure victory for Arsenal.

It was a constant refrain throughout the first half. “Nico! Nico!” Arteta seemed to feel a constant need to relay instructions to Pepe, in particular to hone his position when Arsenal were in possession and to prompt him to track back when Leicester had possession.

It is not necessarily a sign of the manager’s unhappiness when he keeps shouting your name from the touchline - Dani Ceballos always seemed to catch Arteta’s eye even in his best moments post-lockdown - but there were certainly times when it was easy to sense a certain exasperation emanating from the head coach.

That is understandable because Pepe continually feels so close to unlocking him. He is a curious player, one who it is tough to view without assessments being warped by the £72million Arsenal paid for him last summer. He is so clearly a work in progress, one who requires hands-on instruction from Arteta.

In part this may just be confidence. Pepe admitted after his woeful display in a draw at Manchester United last season that he had been rattled and since then he has given further indications that his form can be heavily dictated by his emotions.

That was apparent even in this game. When a flowing move from left to right ended at Pepe’s feet he tried a cutback onto his left foot rather than striking at goal. On the touchline Arteta was unimpressed.

Yet after he played a key role in Leicester’s madcap own goal Pepe seemed to radiate the swagger that he displays when he is at his most effective, a welcome change for a player who looked to have slipped into his shell early this season.

It is easy to see how those could have been knocked by recent events. Pepe ended last season in a rich vein of form, his best game in an Arsenal shirt coming in the FA Cup Final win. Now he finds himself deposed in favour of an older model with Willian having earned Arteta’s trust almost immediately.

There may be more fundamental changes Pepe and Arteta could make that would have a greater impact.

For starters he could develop at least a passing relationship with his right foot; it was tempting to view the chaos that ensued when Christian Fuchs turned the ball into his own net as simply being Leicester players finding themselves dumbstruck that Pepe was carrying the ball towards them using his right foot.

He remains a little too predictable for defenders up against him, Leicester were more than happy to show him towards a crowd of bodies when he cut infield on his left foot.

The signs are there and it is not so long ago that Pepe was looking to be fulfilling his potential. Arteta, however, wants more and it seems he will be very hands-on in drawing it out.

Even in his absence Mesut Ozil continues to divide the Arsenal world. For some the time has long since passed when he is a matter for debate, it is clear that he will be departing come the end of the season and there is little to be gained from raking over old ground about a player who in his last outings struggled to perform at the level he once reached consistently.

Yet for a particularly vocal subsection of Arsenal supporters it is a matter of incomprehensible frustration that their shining light continues to be dimmed by Arteta.

Not picking him for the trip in Leicester is theoretically no different than leaving Ozil out of any other game. And yet as Arteta was asked in his post-match press conference, if Arsenal’s best paid-player is not deemed to reach the standards of the squad for an EFL Cup third round tie when will he hit the level required?

That was one of six questions about Ozil in a press conference, exactly half of Arteta’s responses were on the matter of a player who he has not selected for a match since March. On the first of those he seemed to bristle and simply opted to talk about something else instead.

“I'm really happy with the performance here, how difficult [the players are] making things for the coaching staff to select the squad.”

It is not so much that Arteta attempted to subtly manoeuvre the conversation away from Ozil but that he was effectively ruling out any debate over the status of a player who Arsenal will be paying an eight-figure sum to between now and the end of his contract. Supporters are entitled to know why this player has been frozen out.

The next five questions elicited very little extra. Ozil’s demotion from regular starter early in Arteta’s reign to exile was down to the team “evolving” and those who were being selected are “in my opinion, in better condition.”

Technical director Edu had hinted at similar before the new season began but it is only hints and suggestions. They are not enough to make the questions go away.

Across football there are those players at all levels of the game that you can’t quite keep your eyes off. The ball may be 50 yards from them, they may be stood hands on hips but still you gravitate towards them.

Mohamed Elneny is not one of those players. In fact he is rather the opposite, the sort whose possession of the football instinctively prompts you to look elsewhere. “Is that the Walkers’ crisps' corporate box over there?”

That is no criticism of Elneny, rather the opposite. In a club as riven with drama and self-inflicted wounds as Arsenal there is something wonderfully refreshing about a player who just gets on with things.

Elneny is the sort of player whose stat line you can predict before a ball has been kicked. 92% pass completion? Check. Just the one key pass, most of the rest going sideways? Indeed. No tackles but two or three interceptions? That sounds about right.

It is little wonder that the Egyptian finds himself back in the fold under Arteta. Elneny is not a midfielder you build your side around. He is not the sort you would want to be at the heart of your plans for the biggest games.

So be it. There are plenty of games where steady reliability is all that is required and Arteta can be certain that Elneny will provide that in abundance.

MLS Season Pass will have a local angle after all