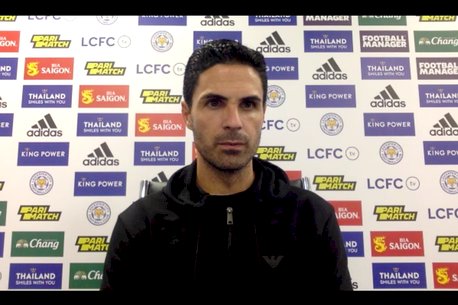 You're still unbeaten in the cups, what did you make of tonight's game?

I'm really happy with the performance, first of all the attitude and the way we approached the game mentally.

The senior players took the lead straight away and I could see that they came here to win the game and after we're so happy with all our young players, the way they're developing and the way they played.

What does Mesut Ozil have to prove to you to get back into contention?

I'm really happy with the performance here, how difficult they're making things for the coaching staff to select the squad.

Why has he fallen out of favour?

The team is evolving, you can see the level they are achieving. This is where we are at the moment. We want to evolve more and play better and compete better.

We need to keep maintaining that.

We are picking the players that we believe are the best for each game. You can see we keep training, it's what we're trying to do.

He played really well. He had a really good performance. He wasn't in the squad for the last two Premier League games because of the competition we have up front.

Everybody needs to fight for their places.

Do you expect him to leave on loan?

We don't discuss the things that are happening behind closed doors. He played tonight and he played really well.

ou said Arsenal are evolving, have they evolved beyond Ozil?

You can see that the players we are changing, we are using, it's very difficult every week not for Mesut but for some other players as well to make the squad. Every week we try to pick the right players.

It's difficult for others as well that aren't involved in the Premier League and didn't play tonight either. We have a squad of 26, 27 players at the moment and we can't give playing time to all of them.

Can you understand why you get so many questions about Ozil?

Of course I understand and I respect your questions but I have to try to do my job as fair as possible. I try to select the players that are, in my opinion, in better condition.

Was Lucas Torreira not playing because a transfer is close?

I'm not making decisions because players might leave or stay. It's just for the players that we see every day in the best possible condition to compete and win football matches.

s there a chance of a move to Atletico Madrid?

I cannot discuss any internal matters.

You may have two trips to Anfield in a few days, how big a test will that be?

You can imagine, probably the toughest place to go in Europe or the world. That's the fixtures, we have to go there.

Let's go first on Monday, let's prepare well and see how it goes.

Mikel Arteta is putting his vision for Nicolas Pepe's Arsenal rise into action, ...

The beautiful sounds of football …

Richie Wellens Leaves Swindon for Salford City as a man...