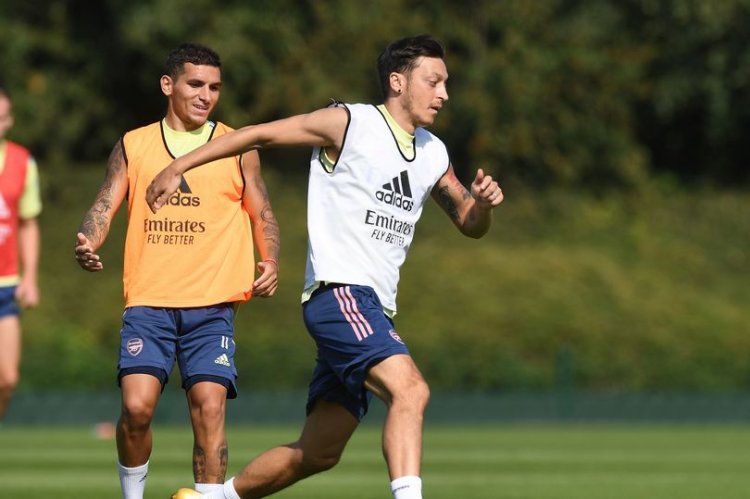 Ozil and Torreira have been linked with exits during this window. (Image: Stuart MacFarlane/Arsenal FC via Getty Images)

Ozil remains frozen out at the Emirates Stadium with just one year remaining on his £350,000-per-week contract.

There has been some talk of an exit during this window but potential buyers have been few and far between and it looks as though he might just be sticking around until the end of his deal.

The same may not be true, however, for some of Ozil's teammates Shkodran Mustafi, Lucas Torreira and Sead Kolasinac who have all been linked with moves away.

And perhaps coincidentally, Ozil has tagged all three in an Instagram story saying in German 'everything taken apart' while filming weights on the floor in the club gym.

Ozil may well be talking about the fact the players have left their dumbells off the stands, leaving a mess behind after a gym session.

But that hasn't stopped some supporters putting together a conspiracy theory, insisting Ozil his hinting at departures for all three.

All three may well end up leaving before the end of the window with Torreira in particular strongly linked with an exit amid reported interest from Atletico Madrd.

But we're pretty sure that in this case, Ozil is indeed talking about the weights and little more.

Houssem Aouar is the missing piece to unlock Arsenal's true potential under Mike...

Eagles 6-0 vs playoff teams this season when Jalen Hurt...

How To Bet On Chelsea vs Manchester City In Vietnam | V...