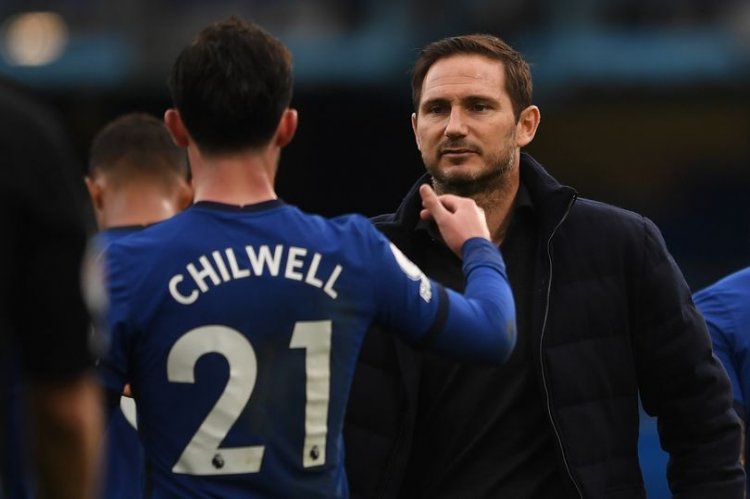 Mendy won't be fit for the match tomorrow, we hope the injury's not too long. Thiago Silva after his trip, he's not unfit but he's not ready to play the game because of the travelling and the game that he played. So he won't be in the squad.

Ben Chilwell is in the squad, so he's got over some of the feeling he had that took him out of the England squad around the injury he's had for a while now.

Christian Pulisic is in the squad and fit to play, Hakim Ziyech in the squad, he's not fit to start but fit to participate for some minutes we hope.

Does that mean Kepa starts?

I'll make that decision myself out of the goalkeepers for tomorrow.

Ziyech - good to have him finally involved?

We brought Hakim here and it feels like a long time ago now, but he also hasn't played since the Dutch league finished during lockdown.

It's a long time and he's worked so hard, he's been fantastic in terms of his professionalism to get fit, and he looks really good in training. I've got a really open relationship with him to know where he's at, and how I feel about it. So it's just game minutes that we need now.

But yes of course I'm excited to get him in and around it, to bring what we brought him to the club for. Which is the opportunity to create chances for us, to be the talented player that he is and we saw at Ajax. And I look forward to seeing him play.

Abraham, Chilwell breaking rules - have you reminded them of their responsibilities?

We've lived in this bubble for quite a long time now, and we have to make sure we stay on point with that at the training ground.

The players also have a responsibility, as do the public, to follow the rules that we are being told, albeit there isn't always massive clarity in them, but that's not an excuse for the lads.

They've made mistakes, I've reminded them of their responsibilities. And from the conversation I've had with them, they were innocent mistakes, but they understood their mistakes. But we move on and I hope and I expect that it won't happen again.

Project Big Picture. What you think of it?

If you look across society and what Covid's done to the world, we're all in difficult, difficult times, so I don't want to be too critical for that. I think people are trying to find solutions all the time.

With the actual football picture I haven't paid enough attention to it to give you the details to know exactly how to move forward, because I've been concentrating on the Southampton game this week. I've read headlines without reading details, so I'd hate to comment too much on that.

All I can say is from Chelsea's side, as we've remained since the beginning of lockdown with some of the great work Chelsea have done, we're certainly intent on making sure that we help and protect and are involved in conversations around protecting the football pyramid, from grassroots all the way up to EFL and Premier League. We'll be very involved in those conversations when needed, as we always are, and try and do the best.

I can't comment too much on all that's going on other than hoping that we do find something that supports the football pyramid.

Premier League has been a bit mad with all the goals and strange results?

Other teams have had that in their own ways, I think the short pre-season had an effect on us and definitely had an effect on other teams with the time to work on the training is crucial. Particularly for squads bringing in new players, working on basic ideas or trying to tighten up and become more fluid. These things only come from the training ground in general so I certainly feel that has had a big factor.

With the two week break, players have been getting fitter through playing for their countries if they have. If not, they have been here trying to get fitter and ready. Maybe things will change slightly but you can’t take away the fact the Premier League is always going to throw up surprises.

Toni Rudiger is still in your thoughts after a failed move?

Every player can play their way into the starting XI, the squad, that’s in every players’ hands and how I try to work here. It is how I work that the things I do are always what’s best for the team and club because we are trying to get results every week.

The players all know that and the beauty of the window being shut is that we can get to work and we know what the squad is and they can contribute, we will need them and rely on them because of the amount of games we will play. Toni is the same as every other player on that one.

Internationals have been good for Reece James, Mason Mount?

I think at times you can find that, yeah. I think there’s some worth in that idea. I think Reece was fantastic on his debut, while Mason got his goal and contributed in those two games that he played in. I come back to a point I made before that where players haven’t had pre-season games or minutes on the pitch, I am actually happy [to see them with their national teams].

Sometimes you might bemoan a player having three 90 minutes or big minutes in games when they are away because you are selfish and want what’s best for Chelsea, but at the minute, our players need games so I am pleased with the ones who have played.

Bigger challenge for the players or you when settling on the best attacking line-up?

Any team that wants to compete towards the top of the league and in the Champions League needs more than one player per position. It needs to be competitive across the front area. We had it last year.

We lost Willian, we lost Pedro, we lost Batshuayi. We've brought players in for the same level of competition in terms of numbers and I feel like the quality levels of players of the options we brought in...of course you want to improve.

It's up to the players of course in terms of their performance and at the same time it gives me a nice problem in terms of selecting players we can hopefully use through the season and options to come off the bench. I'm happy with what some people might call a problem in that area.

Ziyech needs time to get to 100% but with blend of him and Pulisic, does that give you an extra dimension?

It's a combination of things. If you bring in players, you're always looking to build relationships all over the pitch whether it be full backs and wingers, strikers and people playing behind them. Midfield players. Combinations with centre backs, goalkeepers, the back four.

Those things can only be worked on. When we didn't have a lot of these players fit or ready, the ones we brought in. Now we're seeing they are starting to get fit and with time on the training ground, relationships on and off the pitch can grow.

We've got a lot of work to do. We're not the end product. Other teams have shown in the last two or three years how long and the work it takes to become one of the top teams in the world and we have to do it in our own way. We're at the start of that journey in a lot of ways. We're working and it continues all the time to improve.

Where to find Atléti vs. Barcelona on US TV