...the travel restrictions only allow cargo transportation neglecting the end users of the poultry products leading to high cost of distribution and production affecting prices. 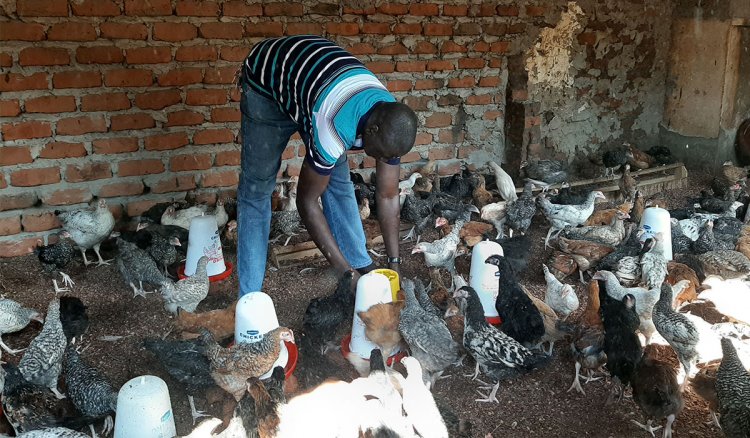 A Poutlry farmer feeding chicken at at farm level

Poultry Farmers under their umbrella organization Poultry Association Of Uganda have urged government to soften the travel restriction directive which they say only allowed vehicles with cargo to move but restricted the final consumers leading to high cost of distribution and production leading to high prices the produce.

They have urged the government to release the transportation of the farm produce for small and medium farmers who supply to markets as they continue to observe the standard operating procedures.

Francis Majwega from Conversion Feeds Ltd, said that as they supply farm inputs including feeds, drugs to poultry farmers, farmers are facing challenge of distribution of their products to the markets and other collection centers due to the high cost of production and distribution to the end users due to the travel restriction on farmers, and consumers within and outside district boarders.

“If people are restricted to move farm products, the markets are affected. You can transport workers to the farm but movement of people to consume them is not possible. The effect comes back to us” he said

While addressing the press at The Uganda Journalists Association headquarters in Kawempe, The Executive Director, Poultry Association of Uganda, Peter Senkungu said  that there is increasingly a high rate of dropouts from the poultry sub sector due to the restriction and lack of optional strategies to respond to the quick restriction.

He mentioned that mainly the supply chains that have been affected include: Farmers, Farm workers, transporters, Food suppliers, service providers,  drug sellers among others.

Edward Makobore, Director, Livestock Resources at The Uganda National Farmers Federation (UNFFE) was optimistic that though there are travel restrictions there is need for farmers to create a resilience that will see the light at the end of the tunnel.

He however said that as a mandate of UNFFE to air out voices of the farmers, the members of the federation will discuss discuss the issues raised by the farmers and the research to address the challenges mentioned including transportation, cost of feeds, among others

The current circumstances should not determine the growth of the poultry sub sector. As demand for the products increases, we have hope”

Houssem Aouar has already teased his next move amid talk of signing for Arsenal ...