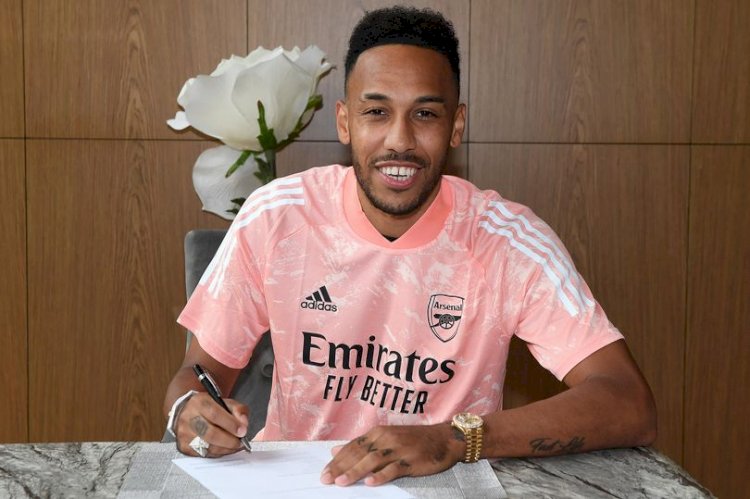 Arsenal have confirmed that club captain, Pierre-Emerick Aubameyang has signed a new contract with the club.

The 31-year-old was out of contract with the Gunners at the end of this season, and extending his stay in north London has been a main priority for Mikel Arteta.

And in true Arsenal style, they did it in their own unique way after weeks and months of speculation around his future, going live on their official website and Instagram page, with pen and paper and an hourglass - synonymous with Aubameyang's contract situation - on a desk in the dressing room initially seen.

Slowly new things were added to that, with the captain's armband and then the Black panther mask also appearing, before Aubameyang took the camera out onto the Emirates pitch to announce the news live on Instagram.

Aubameyang's goalscoring exploits have always proven to be key for Arsenal, scoring 70 goals in 109 games since joining in January 2018, but the evolution of his game beyond goals under Arteta gave the club confidence that he would remain at Emirates Stadium.

Speaking after signing the deal, the Gabonese forward said: "Signing for this special club was never in doubt. It’s thanks to our fans, my team-mates, my family and everybody at this club that I feel like I belong here. I believe in Arsenal. We can achieve big things together. We have something exciting here and I believe the best is to come for Arsenal."

Manager Mikel Arteta said: "It was important for Pierre-Emerick to stay with us. He’s a superb player with an incredible mentality. Being the player to have taken the least amount of time to reach 50 goals with this club tells you everything you need to know about him and his way of working.

"He’s an important leader for the team and a big part of what we’re building. He wants to be up there with the best players in the world and leave his mark. He can achieve that here."

Aubameyang has signed a three-year deal.

Tottenham close to pulling off stunning Gareth Bale swoop as defender closes in ...

Reader Mailbag: Answers to your questions