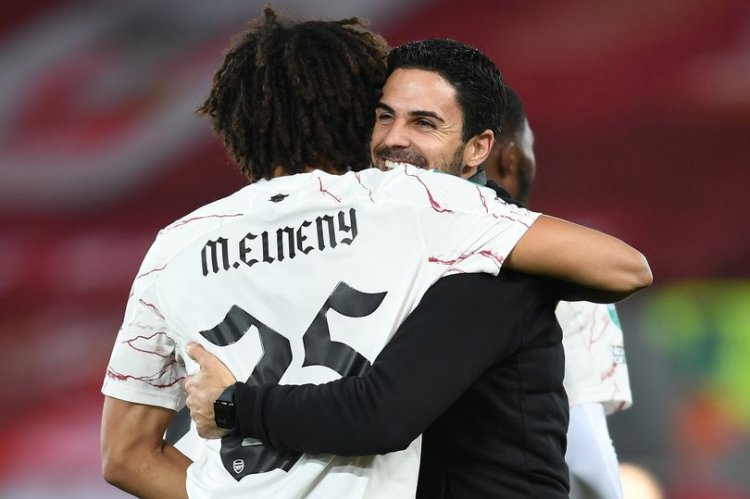 Mohamed Elneny has been used frequently by Mikel Arteta this season to the surprise of many. (Image: Photo by Stuart MacFarlane/Arsenal FC via Getty Images)

Since returning from his loan at Besiktas, Mohamed Elneny has made six appearances [five starts one sub] under Mikel Arteta at Arsenal.

Despite impressing to the point his loan club would have very happily kept him last season, involvement as heavy as this was not expected when he arrived back from Turkey.

Having his number four shirt handed to William Saliba appeared to signify the beginning of the end for a midfielder fans had grown to see as a squad player at best. Dani Ceballos making the U-turn back to north London after such an impressive second half of last season also suggested Elneny's days were numbered in the Arsenal midfield.

Around came September, however, and there he was, starting the season as one of the club's two midfield options at Wembley. With the signing of Thomas Partey likely to make an immediate impact on the landscape at Arsenal, the consistency of game time the 28-year-old has had since may not be as steady.

Looking at Elneny's performance this season, particularly in the early weeks, he was deserving of his place in the side. Granit Xhaka may possess more quality, but positioned on the right, the Egyptian was almost a mirror image of his midfield partner.

In his more recent performances, however, Elneny has failed to be as effective in the midfield. Liverpool were always going to provide a greater challenge than most but Sheffield United was a clear example of the drive missing in the Arsenal midfield that should come with Partey's inclusion.

Expected to drop out of the starting lineup as a result of the club's transfer business, now comes the question of what is next for Elneny. Arteta has taken a liking to his former team-mate, admitting before the season was officially underway: "I know Mo really well. I played with him, so I know what he can be and I know his strengths and weaknesses really well," on August 27.

"He’s a really positive character to have around and he has some really good qualities as well and like anybody else, in the moment that he is with us, he will be given all our support and the best possible environment for them to perform as high as they can."

Despite this, there has been an admission that signing Partey could lead to a formation change. The current notion appears to be a switch to a 4-3-3 considering Arteta attempted using this system immediately after the restart against Manchester City and Brighton. Back to back losses led to the change to a 3-4-3.

If Arteta is to revert to his initial plans, however, a regular starting spot would be much harder for Elneny to come by. With a three-man midfield, he would suit the central role best, shielding the back four while feeding his fellow midfielders the ball. As things stand, however, it appears that role is set for Granit Xhaka - one of Arteta's key men since arriving in December.

Although he may have the stamina to play in the more box-to-box role, he doesn't have the quality of Partey in attack or defence. Then coming to the more creative role of the three, that is the place where he'd be least suited.

With these factors to keep in mind, it's most likely Elneny will deputise Xhaka in his role, making most of his starts in cup competitions. Having proven that he can be of some value to the Arsenal midfield, and with the volume of games that will be played this season, the 28-year-old's presence could prove vital.

As for him being a squad player, this could be exactly what Arsenal need from him. Last season, the side became too stretched for Arteta's liking and looking to avoid that this year, having as many options that fit into his style available will be crucial.

Some may turn their noses up at the job Elneny may play for the side for the remainder of the 2020/21 but especially after Lucas Torreira and Matteo Guendouzi's loan departures, there will still be room for him to prove why Arteta is so keen on him for the time being.

Telemundo acquires USMNT and USWNT rights for 2023 to 2026

Michael Malone named coach of team LeBron for 2023 All-...

Minnesota Vikings Plan To Activate Irv Smith Jr. From I...

Eagles Star QB Jalen Hurts In Contention For Return Vs ...