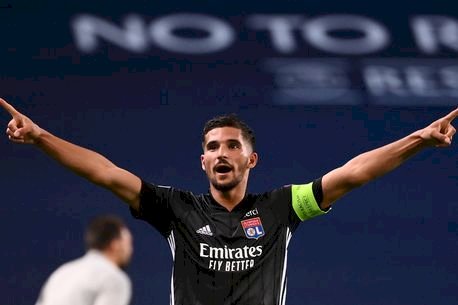 Houssem Aouar continues to be linked with Arsenal

The summer transfer window has been a good one for Arsenal.

The Gunners have added Dani Ceballos, Gabriel, Cedric Soares, Pablo Mari and Willian to the first team, with further deals in the pipeline.

The club have been strongly linked to Atletico Madrid midfielder Thomas Partey and Lyon starlet Houssem Aouar. The duo would provide a significant boost to Mikel Arteta, offering the Spaniard a new dimension in the heart midfield.

Arteta has preferred to use a 3-4-3 formation of late after beginning his time in charge with a 4-2-3-1 formation. It’s believed Arteta prefers a 4-3-3 formation, but he will not seek to implement this for the sake of it - preferring instead to wait until he has the right personnel.

This option would provide Arsenal with a nice balance in the heart of midfield. It would be misleading to cast Partey as a ‘midfield destroyer’, but he is more defence-minded than Aouar.

Allowing him to focus on those aspects of the game would free up the Frenchman to be more creative. He could stitch Arsenal’s play together in the final third and serve as a creator for the front three of Aubameyang, Lacazette and Willian.

Arteta also likes versatility and flexibility when it comes to his tactics and formations, and Auoar provides that. He has played in several different roles for Lyon, and could easily move out wide if Aubameyang drifts into a central area to inhabit the space left by Lacazette.

This is the current formation Arteta is using and both men could slot in as central midfielders.

The dynamic of the team would change in the sense the attack would look to cause overloads out wide. They could do this through the presence of wing-backs, but also the use of centre-backs as secondary attackers in a similar way to Chris Wilder’s overlapping centre-halves at Sheffield United.

This system would also limit the defensive responsibility on the central midfield pairing, with their main task being to shut off passing lanes and provide extra help out wide when the wing-backs are asked to shut down opposition wingers.

The fact both players are good dribblers could also prove a plus for Arsenal against teams that sit in a low block.

It would be tempting for Arteta to unleash his preferred formation if both Partey and Aouar arrived. Realistically, Granit Xhaka would serve as the defensive midfielder and drop between the centre-backs to make a back three when in possession.

That would allow Partey and Aouar to serve as the two central midfielders. It’s been said in the past that Aouar’s defensive contributions aren’t strong enough for him to operate as a central midfielder, but in this system he would be tasked with shutting off spaces more than traditional defending.

As discussed with the 4-2-3-1 setup, Aouar is suited to drifting wide and would also allow Aubameyang to move centrally, inhabiting the space left by Lacazette dropping deeper.