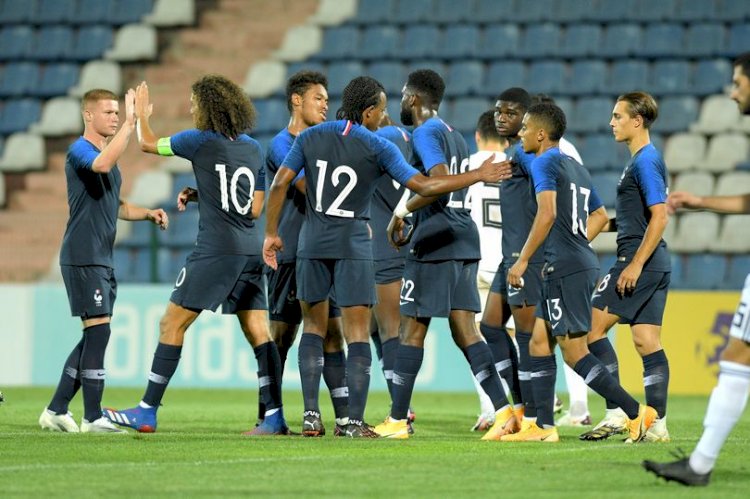 Matteo Guendouzi didn't start as captain but took the armband for France Under-21s during their 2-0 win over Georgia Under-21s on September 4. (Image: Photo by Levan Verdzeuli/Getty Images)

With less than a week until the 2020/21 campaign on the horizon, teams across Europe have had to factor in September's international break into their preparations.

Arsenal managed to play another friendly - a 3-2 home loss to Aston Villa - ahead of kick off at Craven Cottage but had nine players leave north London for their international duties.

Here, football.london runs through each players' involvements so far during the break and whether they have another game to play before returning to Arsenal.

Bernd Leno: Having to compete with Manuel Neuer at international level, Germany caps would be hard for any other goalkeeper to come by in this generation.

So much so that by playing the entirety of their UEFA Nations League game against Switzerland, Bernd Leno was making his first international start since a 5-1 win over Azerbaijan in October 2017. Despite not making the 2018 World Cup squad, since moving to Arsenal, the 28-year-old has made most squads but has made the bench at most.

During the 1-1 draw, Leno was surprisingly busy as Switzerland broke through Germany with ease throughout the match, ending the game with 20 shots to Germany's 16. The goalkeeper made five saves on the night, a late on from a Xhaka free kick being crucial. For the Swiss goal, he slightly overstepped in his shuffle across goal, giving him very little chance of adjusting to save Silvan Widmer's shot.

Germany sit 3rd in Group Four having drawn their first game with Spain 1-1 too.

Granit Xhaka: Full time captain of Switzerland, Xhaka had a slow start to his reign leading the team with a 2-1 defeat against Ukraine before the 1-1 draw with Germany in Basel.

On the whole, Xhaka's performed well. Against Ukraine, he assisted Haris Severforvic's goal, made two key passes - one a lofted ball in behind - made three tackles and an interception in midfield. The Swiss team had chances to kill the game but a sublime finishes from Andriy Yarmalenko and Bogdan Mykhaylichenko cemented their defeat.

The 27-year-old made two more key passes against Germany, peppered Leno with five shots, made three interceptions and one tackle in midfield in a game which, again, Switzerland could have won.

Despite relatively positive performances, a loss and a draw leaves Xhaka and his countrymen bottom of Group Four going into October.

Kieran Tierney: As has been the case very often under Mikel Arteta, Kieran Tierney played as the left-sided centre-back in Scotland's back three while Andy Robertson played wing-back in their 1-1 draw with Israel.

The Scots took the lead through a Ryan Christie first half penalty but were under constant pressure from the visitors. Before they equalised, an inviting cross was flashed by Tierney and out without a touch. Minutes later, receiving the ball from a throw-in, Eran Zahavi danced into the Scotland box and with Tierney too slow to cover across, he smashed the ball home.

Scotland's next game is tonight [September 7] away to the Czech Republic. They are currently second in their group but could jump to first with a win as the Czech's won their opener against Slovakia 3-1.

Sead Kolasinac: Although Bosnia and Herzegovina taking the lead against Italy may have been a surprise, Edin Dzeko being the goalscorer wasn't. In the end, they had to settle for a 1-1 draw as Stefano Sensi's desperate shot was deflected in.

Kolasinac played 81 minutes of the game, but didn't have any notable involvements in either a positive or negative sense, although he did made two interceptions and two clearances.

The Bosnian's next game is also today [September 7], as they take on Poland at home. As things stand, they are 3rd in Group 1, while Poland are bottom having lost to Holland on matchday one.

The 23-year-old, who received his call-up after another impressive Wembley display against Liverpool, was on the bench for England's 1-0 win over Iceland. Harry Kane had an early goal disallowed, Kyle Walker was sent off in the second half as Raheem Sterling converted a late penalty to secure the win.

The victory, ensured by Iceland's missed penalty late on, means England are second in Group Two behind Belgium. Maitland-Niles will be hoping to make his England debut in their next match against Denmark on Tuesday [September 8].

Dan Ballard: The youngster made his senior debut for Northern Ireland in their 1-1 Nations League draw with Romania. His side went down to 10 men in the first half but battled well to secure a point with Gavin Whyte's 86th minute equaliser. Ballard had a solid performance and was substituted in the 91st minute.

Matteo Guendouzi: At Under-21 level, France were playing in the qualification rounds for EURO 2021, rather than in the Nations League.

Despite not being in a matchday squad for Arsenal since his outburst at Brighton on June 20, Guendouzi started Les Bleus' 2-0 win over Georgia Under-21s, and went on to captain the side. Jeff Reine-Adelaide started the game as skipper but going off after 26 minutes, the armband was handed to Guendouzi.

Aside from taking on that responsibility, the 21-year-old was fairly influential during the game. In the first half, he clipped a free kick into the box which caused enough chaos for Ilia Beriashvili to bundle it into his own net. In the second half, he had a chance to finish a two-on-one but with Georgia defenders retreating at pace, he looked for a pass instead - the eventual shot was saved.

Odsonne Edouard secured the three points with a late penalty so the French sit second in their qualifying group, three points [12] behind Switzerland [15]. They play again tonight [September 7] against Azerbaijan Under-21s who have won two of their six qualifying games.

Ahead of August's Community Shield, Arteta admitted he was open to reintegrating Guendouzi into the Arsenal first team: "I have been really clear that everybody starts from zero all the time in football. What you did two weeks ago or two years ago doesn't really matter," he said on August 27.

"It's what you are able to contribute to the team now. Everybody is going to have the same oppor

tunities. They'll have to show with their performances and their attitude that they are better than their teammates or somehow contributing to what we want to achieve this season."

Eddie Nketiah: The highlight of Arsenal's international roundup, Eddie Nketiah scored a hat-trick on his return as captain to the Under-21s in their 6-0 win over Kosovo.

His three goals came within 10 minutes of each other. For the first, he held his position well to nod a header home at the back post. The second saw him use one touch to control the ball before he swivelled and finished in the far corner with his left foot. To complete his perfect hat-trick, the 21-year-old buried a penalty on the hour-mark.

Scoring a hat-trick against Austria in his last Under-21 outing, replicating that has only served well in his preparation for a big season at Arsenal. The Under-21s next game is actually against Austria, who are second [behind England] in the qualifying group for EURO 2021 on Tuesday [September 8].

Reiss Nelson: Five minutes after Nketiah completed his hat-trick, and four minutes after coming off the bench, Reiss Nelson got in on the act with a well taken finish at the near post from Max Aarons' cutback.

Bukayo Saka: The 19-year-old also started in the Three Lions' win over Kosovo and appeared to be playing as a left wing-back. He has been used more as a right winger under Arteta in pre-season, but proving he can excel in both roles last season, it won't be too big a deal. He was brought off in the 62nd minute.

'Our new no.10 is coming!' - Arsenal fans in meltdown after spotting Mesut Ozil ...