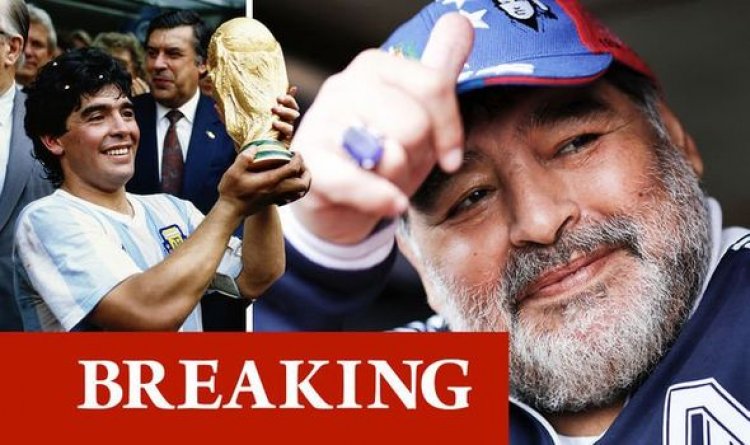 Diego Maradona has died from a heart attack just days after turning 60.

The Argentinian football legend died at home, his lawyer said, just three weeks after having surgery on a blood clot in his brain.

Maradona won the World Cup with Argentina in 1986, having knocked England out of the tournament in a match which saw him score the infamous 'Hand of God' goal and another - widely considered to be one of the greatest goals of all time.

Regarded as one of the greatest players of all time on the pitch, his life off the pitch was equally notorious - amid battles with drug and alcohol addiction.

But it was also during these years that his addiction to cocaine took hold. In 1991, the year he left the club, he was given a 15-month suspension for drug violations.

In 1994 he was thrown out of the World Cup in America after failing a drugs test, before retiring from football in 1997.

In 1999 and 2000 he was taken to hospital suffering heart problems, the second time requiring a respirator to breathe.

In 2004, he was again treated in hospital for severe heart and respiratory problems linked to his drug abuse.

He has undergone two gastric bypass operations to control his weight and received treatment for alcohol abuse.

In January, he had surgery to stem bleeding in his stomach and in July he underwent a knee operation.

Three week ago he was admitted to hospital for surgery on a blood clot in his brain, before being discharged to recover at home.

It was there that he died on Wednesday.

The Argentine news outlet Clarin broke the news on Wednesday afternoon UK time, describing the news of Maradona's passing as having a 'worldwide impact'.

The sad news was confirmed by Maradona's lawyer. Soon, tributes were pouring in from all over the world of football.

The iconic former Argentinian footballer was driven away from the private Olivos Clinic just before 6pm on November 11 as hundreds of fans of photographers tried to get a glimpse of him.

Maradona was hospitalised the previous week and had to have an emergency operation to remove a blood clot from his brain.

Argentinian TV reporters travelling on motorbikes filmed the ambulance carrying him leaving before following the vehicle to transmit every inch of his journey.

His lawyer, Matias Morlahas said that the 60-year-old would continue to receive treatment for alcohol dependency.

Maradona, who was the coach of Gimnasia y Esgrima in his home country, had been admitted to hospital on several occasions since his retirement. He almost died of cocaine-induced heart failure in 2000 and underwent years of rehabilitation.

Maradona, who was well known for having a wild lifestyle during and after his playing days, had a gastric bypass operation to lose weight in 2005 and was once more hospitalised two years later for alcohol-induced hepatitis.

He also fell ill at the last World Cup in Russia, where he was filmed passing out in an executive box when Argentina took on and beat Nigeria in Group D.

MLS Season Pass will have a local angle after all

Wayne Rooney on shortlist for Everton job if Lampard sa...