The receivership period of Crane Bank ended in January 2018, if its not liquidated, it could be repossessed by the main shareholders, the analysis by bank of Uganda legal is ongoing to devise the way forward.

Following am October letter by the defunct defunct Crane bank majority shareholder Sudhir Ruparelia to the Uganda Registration services Bureau (URSB) seeking  to repossess the company since the period of receivership had ended on 20th January 2018, URSB  wrote to the Governor Mr. Mutebile seeking clarifications to the matter, sparking off an internal analysis by the central bank legal team.

During a high level meeting on October 26, 2020 by bank of Uganda officials attended by Deputy Governor Michael Atingi Ego as the chairman, Susan Kanyemibwa the bank secretary, Tumubwine Twinemanzi the executive director supervision, Margret K Kasule the legal counsel and Benedict Makanga who recorded the meeting minutes, it was resolved to endorsed a plan to liquidate Crane Bank and discus the proposed strategy on Crane bank appeal. 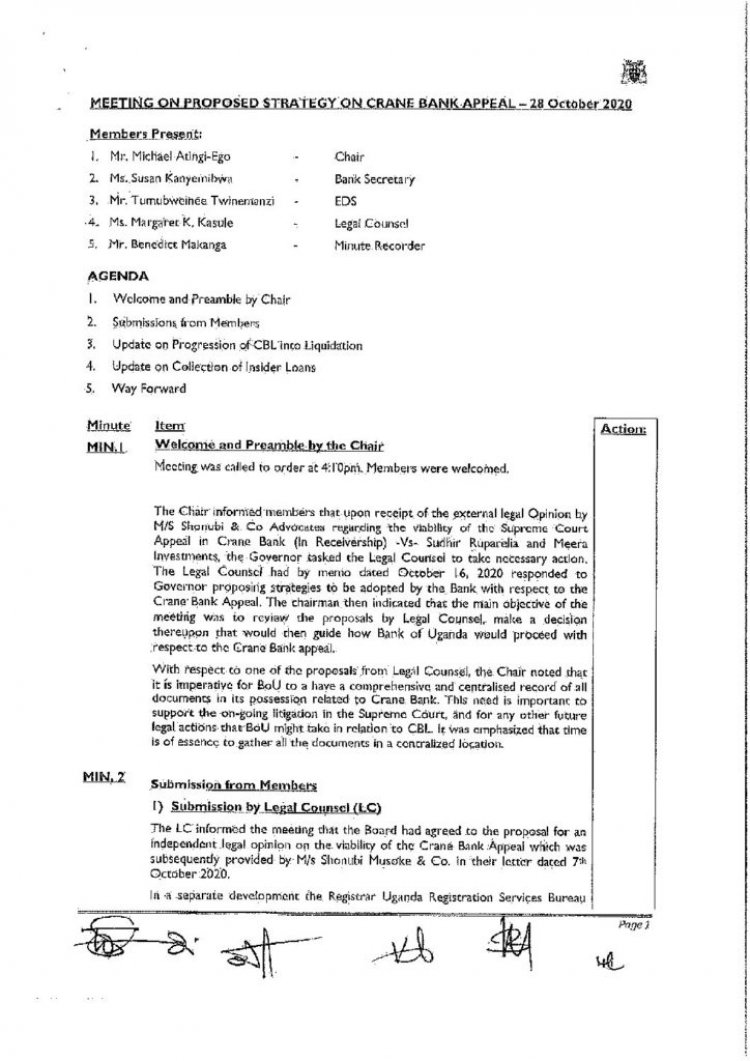 In the meeting The chairman of the Meeting informed members that upon the receipt of the external legal opinion by Ms Shonubi & Co. Advocates regarding the viability of the Supreme Court appeal in Crane Bank (in Receivership) Vs Sudhir Ruparelia and Meera Investments Ltd, the governor tasked the legal counsel to take necessary action.

At the end of the meeting, members agreed that supervision directorate that commenced on this process of liquidating all the closed banks shall be augmented with staff from legal department and Board affairs department.

The meeting also further noted that the Central bank was waiting for the Supreme Court decision on the Crane Bank transition from receivership to liquidation.

The meeting also called for the fast tracking of the progress into liquidation to resume the recovery of insider loans saying that this condition precedent will be critical to ensure that Bank of Uganda is not caught out by the law of liquidation.

According to minutes of the October 28th meeting, the progression of the defunct Crane Bank Ltd into liquidation, a matter red flagged as sensitive was considered to attract of “serious legal hitches” after BoU Legal Counsel Margaret Kasule presented a legal opinion from external lawyers — Shonubi,  Musoke & Co., who advised for the liquidation process to start.

However, the meeting also attended by the Director for bank supervision Dr. Tumubwine Twinemanzi then agreed that the “BOU waits for the Supreme Court decision before progressing Crane Bank Ltd from receivership to liquidation” — reads part of the minutes seen by this website.

However, it should be noted that  even before these legal hitches were resolved, according to information gleaned from another memo, written by Ms Kasule, to the Governor on November 09th 2020, the Deputy Governor had earlier, on November 4th 2020 written to the Governor recommending that Crane Bank Ltd be liquidated.

“Bank of Uganda (BoU) took over management of Crane Bank Ltd (CBL) on October 20, 2016 and subsequently progressed it into receivership on January 24, 2017. In exercise of its powers under section 99 (1) & (2) of the Financial Institutions Act, 2004, BoU has now placed CBL under liquidation and ordered the winding up of its affairs. The Central Bank shall be the liquidator of CBL,” Mr. Emmanuel Tumusiime-Mutebile, said in the notice.

“As we advised earlier in May 2019, matters of Crane Bank Ltd require progression into liquidation. This would ease the current impasse where legalistic arguments are being used to tie the hands of the Central Bank while attempts are being made to change status quo with the intention of rendering a favourable Supreme outcome nugatory,” Ms Kasule said in her memo, also copied to the Deputy Governor. 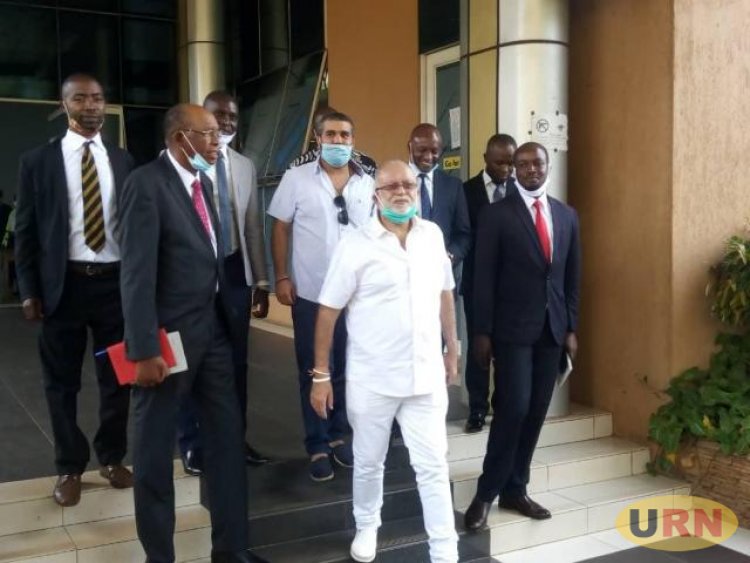 Dismissing BoU’s application Paul Mugamba, Justice of the Supreme Court on  November 9, 2020 ruled that although the order sought by BoU against URSB was to restrain it from registering any resolutions in respect to Crane Bank,  there was no evidence of any resolution which was intended to be registered.
“Respectfully, I  do not see any act or acts that have been done or are about to be done by the 2nd respondent (URSB) that are prejudicial to the interests of the applicant CBL/BoU,” the judge ruled.

In another internal leaked memo, titled: “Ruling on application for an injunction in Civil Application No.33 of 2020- Crane Bank in Receivership vs. Sudhir Ruparelia and Uganda Registration Services Bureau (URSB), Ms Kasule wrote:
“On the basis of the above ruling and affirmation of the Supreme Court Judge, that the power of management control and power over CBL remained with the Bank of Uganda, we recommend immediate progression of CBL into liquidation. We recommend that this be done immediately to prevent further interference with CBL’s rights and outstanding obligations. Immediate action would also enable effective pursuit of CBL’s rights and dues,”.

Financial lawyers have since poked holes into the notice, reasoning that a receiver without authority cannot progress CBL from receivership to liquidation.

City lawyer Isaac Ssemakadde of the Center for Legal Trust says Bank of Uganda and its legal advisors are wrongly interpreting the Financial Institutions Act by rushing to illegally liquidate Crane Bank, before the court processes are exhausted.

The city attorney says, already the two court rulings from the High Court’s Commercial Division and the Court of Appeal sent a warning to the central bank for wrongly interpreting the Financial Institutions Act and misusing the Act while managing the banking institutions in the country.

Meat Starter Culture Market is predicted to reach US$ 9...

HOW TO MAKE LIQUID SOAP

Embedded Cyber Security Industry Market will reach at a...

Facts and Figures Regarding Baby Bedding Market By 2027...