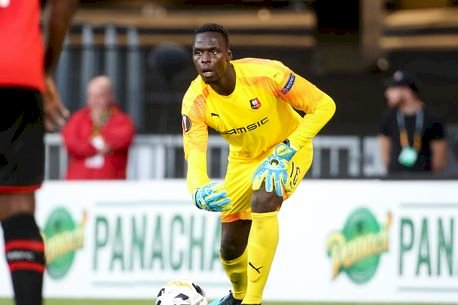 Edouard Mendy has signed a five-year contract at Chelsea's to become the club's ninth signing for a fee believed to be around £22million.

The 28-year-old was hardly a household name before he was linked to the Blues and now he has certainly shot into the limelight as he aims to replace Kepa Arrizabalaga in between the sticks at Stamford Bridge.

So what do we know about him so far?

Mendy helped the Breton side to third in the coronavirus-curtailed Ligue 1 campaign, qualifying the provicinal club for this season's Champions League.

Petr Cech, the Chelsea technical advisor who played for Rennes before arriving in West London, is an admirer and has played a key role in getting a deal in place.

While not a household name across Europe, a quick look at the data suggests a very good goalkeeper who excels in the areas that Kepa Arrizabalaga struggles.

According to WhoScored, 94 goalkeepers made 20 appearances or more in Europe's top five leagues last season and Mendy ranked ninth in terms of average save success (75.3%), with Kepa last (53.9%). The average among all 94 was 68.4%.

At 6ft 6in, he is far more commanding from crosses and set pieces and tends to be quite proactive.

Mendy's recent rise has been sharp. He started his professional career in the French third tier at Cherbourg, from 2011 to 2015.

He spent a campaign with Marseille's second string before signing for Reims in the summer of 2016. He was second choice in his first season there but then became a key player as they won promotion from Ligue 2.

He was an ever present in the 2018-19 campaign, impressing enough for Rennes to sign him two years ago.

Since then he has become Senegal's first-choice, having also been eligible for Guinea-Bissau and France.

Dempsey calls this USMNT the best soccer generation yet

US House passes bill for equal pay for women; A win for...

Your defence is in trouble