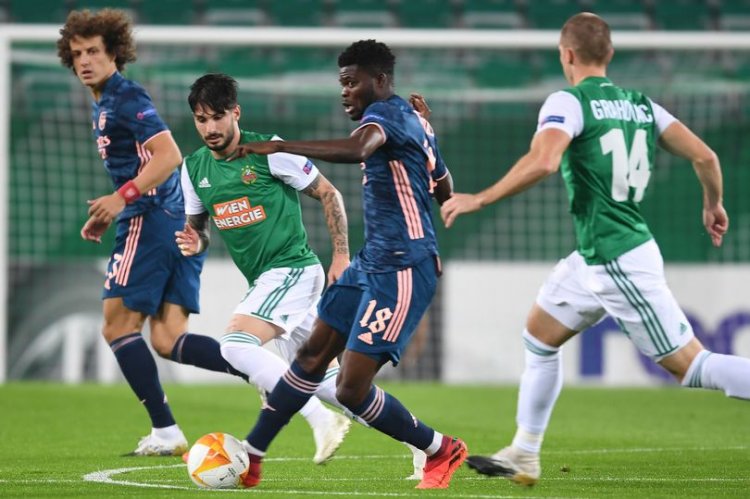 Thomas Partey in action for Arsenal against Rapid Vienna

The midfielder joined the Gunners from Atletico Madrid in a £45million transfer deadline day move.

He made his Arsenal bow as a late substitute in the 1-0 Premier League defeat at Manchester City last weekend.

But he was handed his first start for the club in Thursday night's Europa League Group B opener away to Rapid Vienna.

Things did not all go according to plan at first, as the Austrian hosts took a 51st-minute lead through Taxiarchis Fountas.

However, Mikel Arteta's men hit back to claim a 2-1 victory, thanks to goals from Davis Luiz and Pierre-Emerick Aubameyang.

Arteta was pleased with Partey's contribution, describing his performance as "really solid, really comfortable" and "fantastic".

The manager added: "We know that with the price we paid for him and the profile of the player that he is that he is going to have a lot of people looking at him every single game.

"This is about the structure we have as a team, the flow, the unity and the cohesion that we need in our team. He's one piece of that. Hopefully he's a big piece."

And Partey enjoyed himself, it would seem, after completing 90 minutes.

The Ghana international posted three pictures from the match on Instagram, accompanied by the caption: "Good feelings".

That was followed by a raising hands emoji and the hashtags #Arsenal and #UEL (UEFA Europa League).

Mikel Arteta accused of being dishonest to Arsenal fans over treatment of Mesut ...

Pierre-Emerick Aubameyang has revealed why Thomas Partey is the perfect signing ...