Arsenal failed to score in their home defeat to Aston Villa, but the evidence suggests that the Gunners have a wider attacking issue to fix 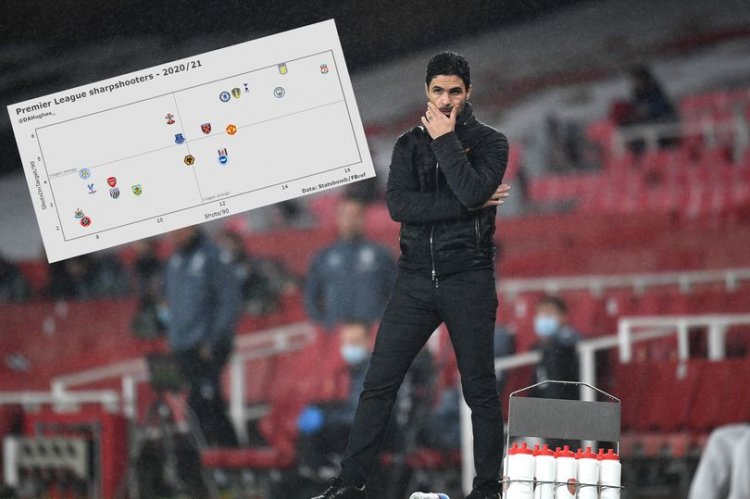 It felt like somewhat of a wake-up call for Arsenal on Sunday night as they were well beaten at home by Aston Villa.

Mikel Arteta’s men looked largely toothless in attack and struggled to carve open any clear cut chances, registering just two shots on target across the course of the 90-minute match

Whilst it was only Arsenal’s first defeat in four following a run of three consecutive victories, that record was padded out somewhat by wins in the Europa League. Their record in the Premier League alone has as many losses as wins so far - W4, L4 - with three of those defeats coming in their previous four matches in the competition.

Although Arteta’s side ended up conceding three goals on Sunday night, their defence hasn’t really been their biggest concern. In fact, only five sides have conceded fewer goals than their total of ten so far this season and two of those sides have played a game less.

It is instead Arsenal’s inability to create a high number of chances that is proving to be their biggest problem.

Only five Premier League sides have scored fewer goals than their total of nine, and they are yet to score more than two goals in a league fixture since their 3-0 opening day victory away at Fulham.

In runs like these, sometimes it can be a case of luck going against a team and underlying numbers can normally indicate if we are set to see a change in their fortunes in the not so distant future. For example, if a side is taking plenty of shots, or posting high Expected Goals (xG) numbers, it shouldn’t be too long before they start finding the back of the net on a more regular basis.

Yet from an Arsenal point of view, their underlying numbers are only reaffirming their attacking woes.

They rank below the league average for both shots attempted per 90 minutes and shots hit on target per 90 minutes so far this season. Interestingly, Sunday’s opponents Aston Villa rank amongst the league’s best teams in both areas.

Arteta’s side also ranks an uninspiring 12th in the league in terms of xG, suggesting they haven’t been creating an abundance of high-quality chances either.

The most obvious explanation for this underwhelming attacking output seems to come down to their inability to turn their ball dominance in deeper areas into dangerous attacking moments inside the final third.

It’s not entirely clear why things aren’t clicking for Arteta’s side going forward, yet some of it could be attributed to the fairly rigid philosophy that the Spanish coach likes to deploy.

His system is highly structured and organised, which has definitely had a positive impact on the defence. Yet perhaps a downside is the lack of attacking flair bestowed to his most dangerous attacking players. They've often seemed shackled or forced to play within themselves which may be why only Sheffield United and Burnley have attempted fewer dribbles than Arsenal in the campaign so far.

Perhaps Arteta will need to loosen his tactical grip on the side after the international break if he wants to see them become more of a legitimate goal threat in the coming months. Failure to do so could seriously hinder their ambitions for the rest of the season.

Mesut Ozil delivers his verdict on Arsenal's 3-0 loss vs Aston Villa with social...

Where to find USWNT vs. New Zealand on US TV