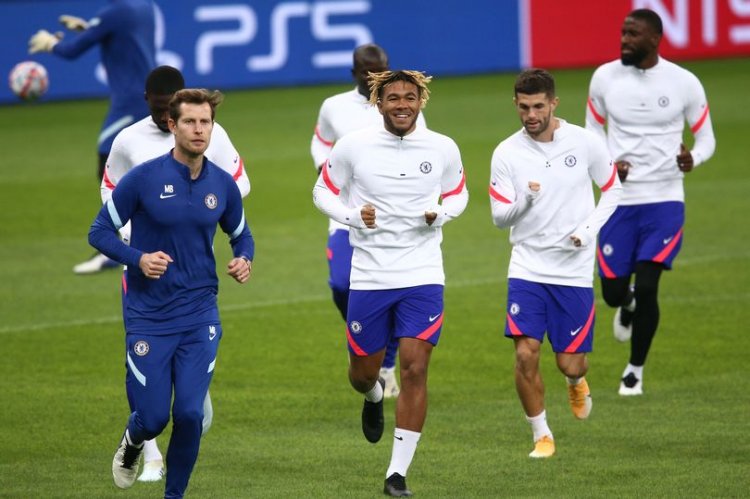 Chelsea's players train ahead of the Champions League tie against Krasnodar (Image: STRINGER/AFP via Getty Images)

Chelsea take on Krasnodar on Wednesday evening, as they look to pick up their first win of this season's Champions League group stage.

The Blues opened their campaign with a goalless draw at home to Sevilla, followed by another stalemate in the Premier League at Manchester United, so boss Frank Lampard will be keen to resume winning ways.

The west London side have already named their squad for the game, with 22 players travelling to Russia for the tie.

Lampard has left centre-back Thiago Silva at home, with an eye on the weekend's clash against Burnley at Turf Moor.

This could open the door for Antonio Rudiger to return to the first team, after a period of time on the sidelines following a failed move away in the summer transfer window.

"I've had discussions with Antonio, and all the players, as many as I can," Lampard said in his pre-match press conference.

"I've always had a positive relationship with him. Everything I do I do for the club and selections and for the team, and every week with the squad we have sometimes you have to have players out of the squad. So that's always big news for everybody.

"But we have a very positive relationship. He's in the squad, so very much in contention to play."

On addressing his side's recent lack of goals, Lampard added: "I think with the last two games we’ve played against high level opponents. Seville and Man United in their own way offer a lot of threats. Going into a Champions League game with Seville you have to respect what they can do.

"They just won the Europa League last year, they took Bayern to extra time in the Super Cup and they are a very talented team. So I wanted to get both sides of our game right. I think we got a lot of our defensive game right on the day. I didn’t like every bit of it because we are still improving because now we are training in real time.

"These games you can’t train too much in between. There are too many physical demands of players in the games. So we have to try to organise the team. I think we did it well in those two games in the defensive side.

"The balance of us going forward wasn’t as great as I would want it to be, but I said after the game that that is the least of my worries in the big picture, because I know we have a lot of talent in this team so, getting both of sides of our game is something we are working on every day and I’m happy where we are, but we want more and that will take work."

Mikel Arteta already has the answer to Arsenal's centre-back crisis ahead of Man...

Where to find Chelsea vs. Man City on US TV