.......I have today received a contribution of UGX 530 Million from Ham Kiggundu as support to the COVID-19 Vaccination Crusade. He has made a big contribution, I don’t know whether you people are aware, he wants to vaccinate all his staff, his technical people, his servants in his companies 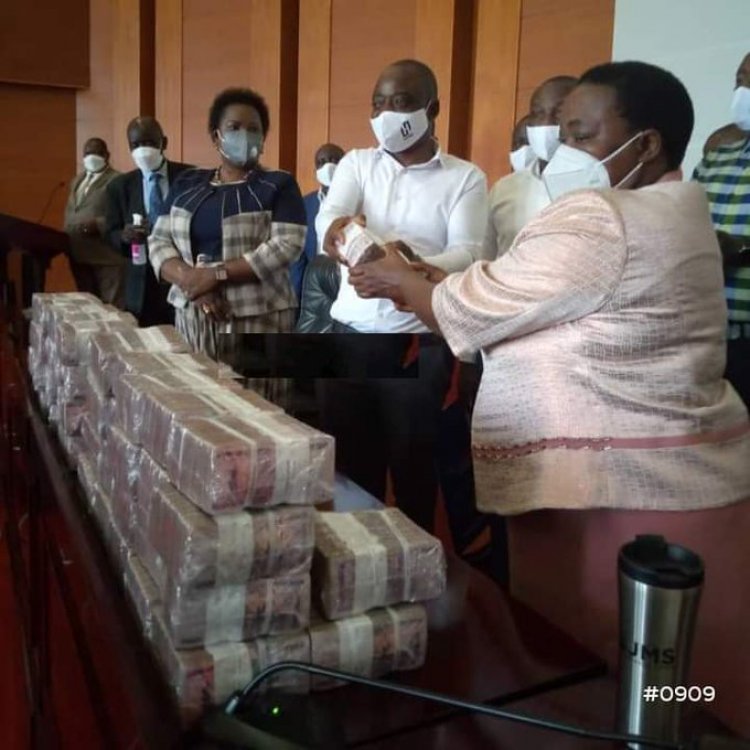 Following the announcement on 10th June 2021 by Businessman Hamis Kiggundu to contribute over UGX 530 Million toward purchasing COVID-19 vaccines as a hand to government while at Uganda Media Centre, on Friday 2nd July 2021, the Kampala tycoon fulfilled the pledge and handed over the cash money to the Prime Minister of Uganda Robinah Nabbanja at the Office of the Prime Minister (OPM)

“I have today received a contribution of UGX 530 Million from Ham Kiggundu as support to the COVID-19 Vaccination Crusade,” Prime Minister Nabbanja tweeted to confirm receipt of the cash donation.

“I have today received a contribution of UGX 530 Million from Ham Kiggundu as support to the COVID-19 Vaccination Crusade. pic.twitter.com/aVHs6uzsCY

The Prime Minister who is also the Chairperson of the COVID-19 Task Force at OPM after receiving the money promptly called the bank manager of Stanbic bank at Garden city branch who accepted to receive the even though the banking time had reached.

Nabbanja prepared with her security team to deliver the money to the bank until she confirmed that UGX 530 Million was banked as this website came to learn in the evening of Friday after guiding against her other staff on the modalities of transporting the money.

“I took the money myself to the bank at Garden City at around 6pm,” she said on phone.

Ham told journalists during the handover of the money that he had created an account on which other private sector players would deposit their contributions with government signatories which Prime Minister said that ministers and task force official were not allowed to be signatories to avoid unforeseen circumstances.

“We have created an account with Stanbic bank where Dr.Musenero will be a signatory and a few other members that government might choose for this particular fund. Other private members may come and we support government. The money will go directly to this account to contribute towards the purchase of vaccines,” the city businessman said in front of cameras.

Nabbanja insisted that the money can only go to an account earlier opened up by government as President Museveni had directed.

“In fact, ministers are not allowed to be signatory to those accounts,” she said.

She applauded the contribution made by the Businessman.

“I want to take this opportunity to thank a certain young man, Hamis Kiggundu. He has made a big contribution, I don’t know whether you people are aware, he wants to vaccinate all his staff, his technical people, his servants in his companies. He has also made a contribution of Ten thousand Vaccines so that we can vaccinate Ugandans. He’s fighting Covid,” the Prime Minister said in appreciation of Ham’s contribution towards the fight against Coronavirus.

Edu has already been told when Arsenal can complete £34m transfer for Manuel Loc...

Houssem Aouar has already teased his next move amid talk of signing for Arsenal ...