The COVID-19 vaccination exercise to workers and tenants is one of the moves to give back to the people. 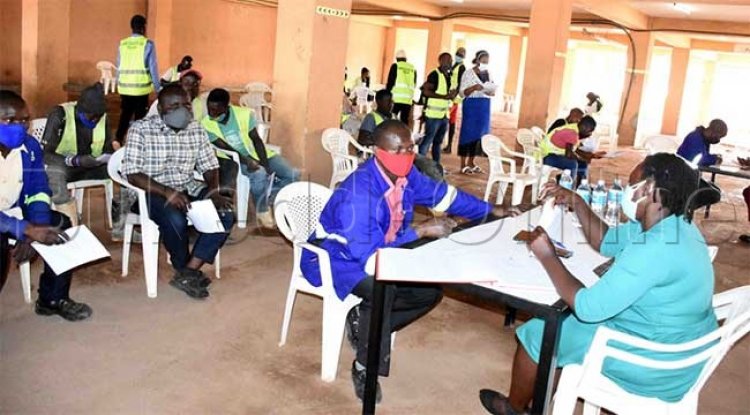 Tycoon Ham Kiggundu has kicked off a vaccination drive to benefit over 5000 people including workers and tenants in Kampala, a move Minister for Kampala Minsa Kabanda says was a big heart from the young businessman.

While launching the exercise by Minister Kabanda at Ham Shopping Mall, Kampala hundreds received their first COVID-19 vaccine jab after Minister for health Ruth Aceng gave him over 5000 vaccine doses.

Minister Kabanda commended Ham’s efforts and big heart for the  contribution to government’s fight against COVID-19 pandemic and promised that when the lockdown is lifted Ham building will be among first priorities for re-opening because of their adherence to the standard operating procedures.
“Ham is the first businessman to promise and fulfill his pledge. Ham shopping mall will be among the first to be opened when locked down is over" she said

Edward Nakibinge one of the Directors at Ham Enterprises who represented Ham Kiggundu said that this was one of the gestures to give back to Ugandans through offering vaccination services. He said this was one of the reason Ham donated the UGX530Millions to government to support the response.

The Ministry of Health spokesperson Emanuel Ainebyona said that the ministry delivered 2000 doses at the beginning to vaccinate workers and tenants on Ham shopping mall as they await other doses between now and July 27th 2021 from the global Covax facility.

Recently Ham donated UGX 530 Million to contribute to the procurement of COVID-19 vaccines which he handed over to Prime Minister Robinah Nabbanja at Office of the Prime Minister.

While handing over the money to the prime minster, Ham asked government to avail him doses of COVID-19 vaccines for his workers and tenants which has come to bar fruits.

The chairman of the donations committee, Emmanuel Katongole said during the delivery of the UGX530 Million that, 'when times are tough, it is the tough like Kiggundu that keep going, and we hope that everyone now borrows a lead from him.

Kiggundu's cash donation for Covid-19 vaccines comes after the Government targets to vaccinate over 18 million required to attain herd immunity.

However, Uganda and several African countries including the developed countries are currently suffering a Covid-19 vaccine shortage due to hoarding in the international community.

TBS Anti-Christian ‘Comedy:’ God Is ‘Sick Son of a B*tch’

Patrick Salvado explains why you should ‘take your family to work’

Intuitive eating: How to make it work for you (and your... Here's what you need to know about getting into electric scooters, with a sample... URA are through to the next preliminary qualification round of the CAF Confederation... Barely a week after Jacob ‘Ghost’ Mulee departed from his role as Harambee Stars...