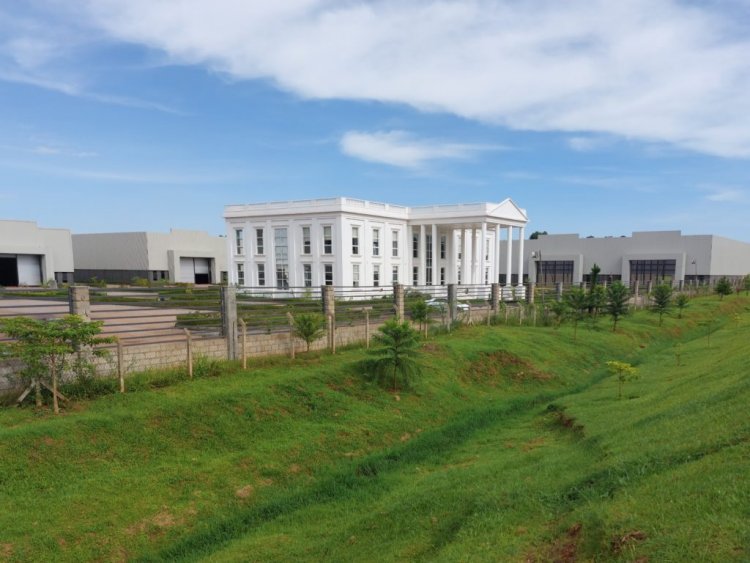 Ugandan Businessman Ham Kiggundu aka Ham, the CEO of The Ham Group of Companies has explained the constructed impressive replica of the US White House will go a long way in transforming Ugandans’ mindset in the way they earn from agriculture, tourism and other business ventures that he said are all gifted to Uganda by nature.

The project will house his Ham Agro-Processing Industries Headquarters in the multi-billion state-of-the-art building dubbed the ‘Ugandan White House’ located in Entebbe.

Ugandan businessman is an  investor, real estate and property developer, philanthropist, and author of two books; ‘Success and Failure Based on Reason and Reality,’ published 2018, and his newly published book ‘Reason as the World Masterpiece‘, 2021 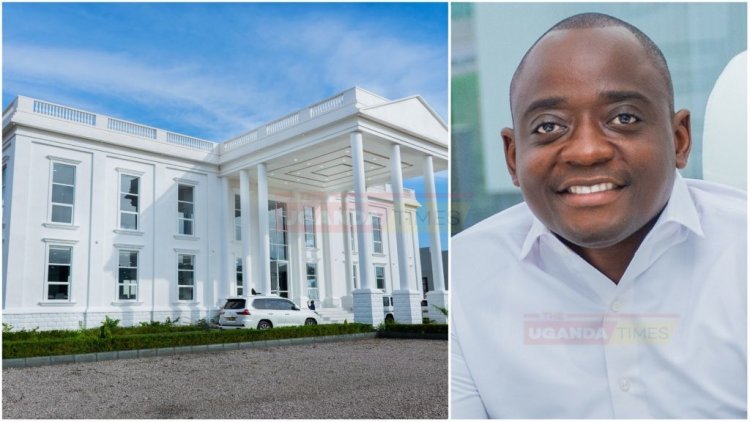 Hamis said, “I have always admired the white house picture above as a young man but based on reason, why go to America as a tourist to visit the white house when I have the means to build a look-alike here back home,” He ventured into import trading mainly of textile material to Uganda and slowly grew in the business from which he launches a multi-billion real estate company Ham Group of Companies.

His real estate company has already built a stadium, malls, Agro-Processing industries, Silos and manufscturing and proccessing plants, a Luxury residence city among others. The multi-billion state-of-the-art building; the “Ugandan White House” which is located along Entebbe express highway.

Drawing inspiration from the official residence and workplace of the president of the United States of America, Hamis Kiggundu’s lookalike project houses his Ham Agro-Processing Industries Headquarters.

On the surface, this extravagant display of opulence appears purely like a vanity project. In contrast, there is a lot more depth to the property tycoon’s motivations.

Ham believes in personal responsibility and leading by example. He built his Uganda White House out of love for his country as an illustration to all Ugandans and Africans to invest in their homelands. 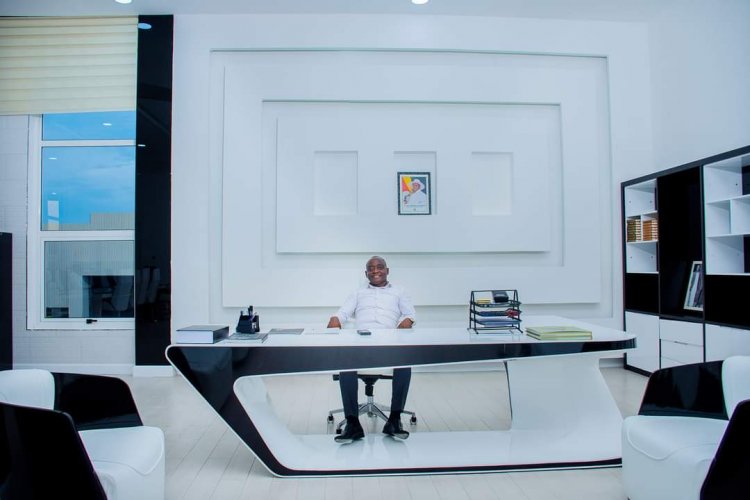 According to Hamis, Ugandans and Africans as a whole don’t invest in their own countries. We’ve been brainwashed by our western-imposed educational systems and western social media platforms into thinking that the West is somehow superior to us. “From the time Africans go to school, we start dreaming of going to America or Europe for the chance of a better life. We study so hard, and then work equally as hard for an opportunity to get out of Africa. We leave our homeland and head for the West, then work towards the development of these western countries, leaving Africa our motherland in absolute poverty,” he says.

Ham says it doesn’t have to be this way, so long as Africans change their mindset and focus on building their homeland. The answer lies in the state of reasoning out what needs to be done and putting it into reality. 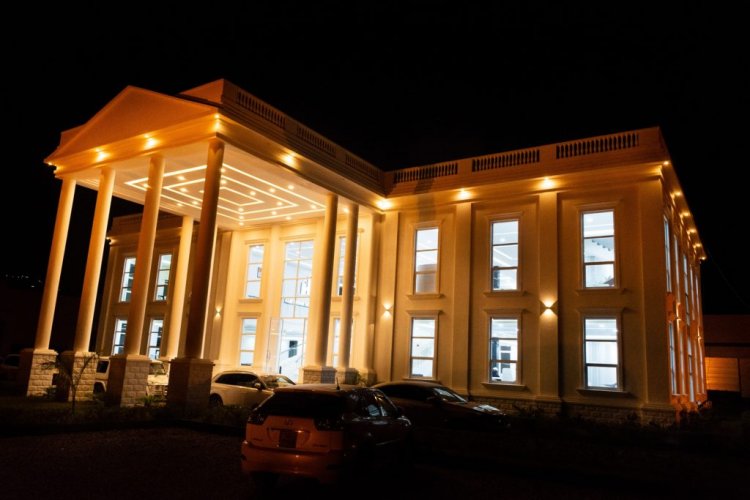 His Uganda White house in picture above in night time stands as an illustration to his fellow countrymen that if the US can build it there, we too can build it here.

According to young business magnet, his Ugandan White House is a regional tourist attraction and equally an example that you don’t need to go to America to tour the White House since the development is already set in the Pearl of Africa. 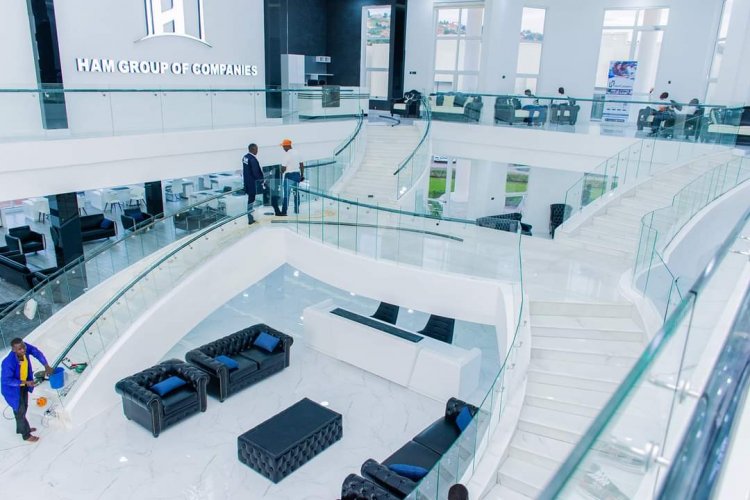 Hams White House has already been visited by Ministers and International Superstars:

Ham explains that God has blessed Uganda with a green landscape across 80% of its land surface area, tropical climate, and fertile soils, which is why it’s called the Pearl of Africa.

However, despite all these natural God-given resources, Uganda is still ranked among the world’s poorest countries.

Likewise, Africa is naturally gifted with abundant natural resources. From human resources, precious metals, oil and gas, favorable climate, and fertile soils. “Yet today, there are more Africans that have flown to the west willingly to work than when they were taken by force as slaves,” he exclaims.

Which leads us to question; why is Africa poor even though it holds the largest percentage of the world’s natural resources and deposits?

According to Ham, it is the mindset of focusing on one’s advancement while not supporting those around you that is keeping Uganda chained.

“Most Ugandans dream of getting a four-wheel drive as the solution for dealing with the potholes in our streets, instead of focusing on fixing the potholes,” he says.

It simply means Africans at home and in the diaspora need to stop investing in foreign lands and individual satisfaction at the expense of their people and land.

Ham believes it is possible for Africa to self-sustain. “Africans have the capacity transform from being merely consumers to stranding as producers,” he says.

“Instead of spending on imported finished products, we should start investing in production because we hold the resources, raw materials and human capital to run the factories,” he adds.

Investing in production is the driving motivation behind his Ham Integrated Agro-Processing Industries. In a bid to add value to the country’s vast agricultural production and increase farmers’ incomes, the property tycoon is putting up one of the most advanced agro-processing plants in the country.

According to Hamis, the plant, strategically located just 7 minutes from the Entebbe International Airport, cost over $156 Million  to set up. It serves as a model factory for a project he plans to roll out across the country based on agricultural zoning.

“Agriculture stands as a clear and direct gateway for Uganda from poverty to prosperity,” he says.

Ham believes that if Uganda is to develop, it should be a collective effort from all Ugandans, and agriculture is the way forward. “With our good climate, fertile soils and young, energetic population, agriculture is a means for the youth not only to earn income but contribute to the tax base and increase the national income as well,” he says.

That is why, through leading by example, Ham has already started investing in 10 agro-processing plants around the county with a central region pilot project (Ham Agro Hub) situated on iver 1,000 acres in sisa to employ as many Ugandan youths as he can.

“What should make a Ugandan proudly a Ugandan should be their contribution to the progress and prosperity of their motherland, Uganda,” he says.

Ham believes that if Uganda is to achieve reasonable progress, it has to be a joint collective effort from within the hearts and minds of Ugandans, reflected by productive output on the ground. And he is willing to lead the way.

The young billionaire notes that “We should not leave Africa chasing our dreams abroad but rather transform Africa our motherland into our dreamland based on reason and reality.”

Sharing the Spirit of Ramadan Through #MonthofGood

Strengthening Our Efforts Against the Spread of Non-Consensual...

Last dance of the midfield general – Fufa, UPL to honour...

Fufa has confirmed that Police FC Captain Tonny Mawejje will be accorded a standing...