Ham Vs DTB: Court of Appeal has sent the UGX 120 Billion case back to High Court as Ham vows to appeal the retrial.

Ham through Lawyer Fred Muwema will in a few days file a petition in the Supreme Court contesting the judgement delivered by the three Justices quashing the Commercial Court’s judgment which ordered Diamond Trust Bank (DTB) to refund shs 120 billion which the bank allegedly deducted from Ham’s accounts. 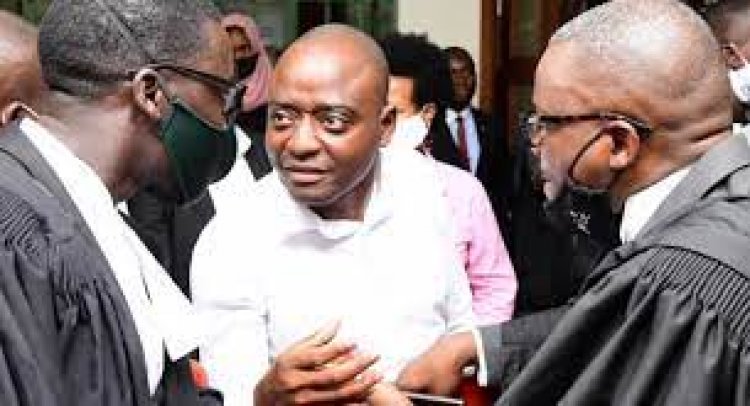 Ham listening to his Lawyer Fred Muwema after a Court session

The decision of Court of Appeal Justices Keneth Kakuru, Christopher Madrama and DCJ Richard Buteera has ruled that the case involving Hamis Kiggundu and Diamond Trust Bank to be sent back to high court for retrial following an establishment that High Court Judge Henry Peter Adonyo did not address himself on the merits of the case before deciding it on a point of the law.

The judges have faulted justice Adonyo for ignoring DTB defense before awarding the compensation to Ham and said that their judgement has been made on merit.

However Hamis Kiggundu through his Fred Muwema Tycoon Hamis Kiigundu has vowed to challenge Court of Appeal’s retrial ruling delivered this Wednesday in the Higher Court.

The Businessman will in a few days file a petition in the Supreme Court contesting the judgement delivered by the three Justices quashing the Commercial Court’s judgment which ordered Diamond Trust Bank (DTB) to refund shs 120 billion which the bank allegedly deducted from Ham’s accounts.

The decision was based on a suit filed by Kiggundu, through his companies; Ham Enterprises and Kiggs International, against DTB Bank. He accused the banks of illegally taking out more than UGX 120 billion from his bank account in Uganda.

Kiggundu stated that between 2011 and 2016 his companies were given loans totalling UGX 41 billion by both DTB Uganda and Kenya and he deposited with them several properties as security.

However, Kiggundu said that as his companies were repaying the loans, he realized UGX 34 billion was illegally removed from his shillings account and USD 23 million from the dollar account.

In the aftermath, Commercial Court Judge Adonyo agreed with Kiggundu and ruled that the credit facilities offered by DTB-Kenya to Kiggundu were illegal since the bank is not licensed to carry out the financial institution business in Uganda.

Adonyo also ordered the banks to return the properties that Kiggundu had mortgaged citing that the evidence on record indicates that all the loans obtained were fully settled. He also ordered the refund of the monies the banks had deducted illegally from his accounts.

Christopher Izama Madrama: There was no need to enter default judgment which restrained the appellant from being heard. Appeal partially succeeds.

Keneth Kakuru:  Amendment of pleadings was beyond the scope allowed within the law. It changed the cause of action.

Court could not order enforcement of contract said to be illegal. One party cannot benefit from an illegal contract.

Appeal should succeed. He would order that the amended plaint cannot stand.

Richard Butera: The claim was not a liquidated demand and it was wrong for the judge to enter a default judgment.

Amendment of pleadings was irregular for changing the cause of action. Amended pleadings struck out.

Appeal succeeds. Suit should be remitted to the High Court for hearing on the basis of original pleadings.

Ham told this website that, he will not accept to go back lower court for retrial because he has already left that stage.

“This was a matter of addressing an illegality which was not done,” he said.

“That is why we are going to Supreme Court.”

The  businessman has vowed to sue DTB afresh in Kenya for illegally transferring money into Uganda without the authority of the country’s Central Bank.

“So we are taking both DTB Kenya and DTB Uganda to Court in Kenya,” he said.

Africa shall prosper if we reason out exploitive systems of mental colonialism: ...