Arsenal may be chasing £45million Thomas Partey from Atletico Madrid, but the answer could be a lot closer to home for Mikel Arteta 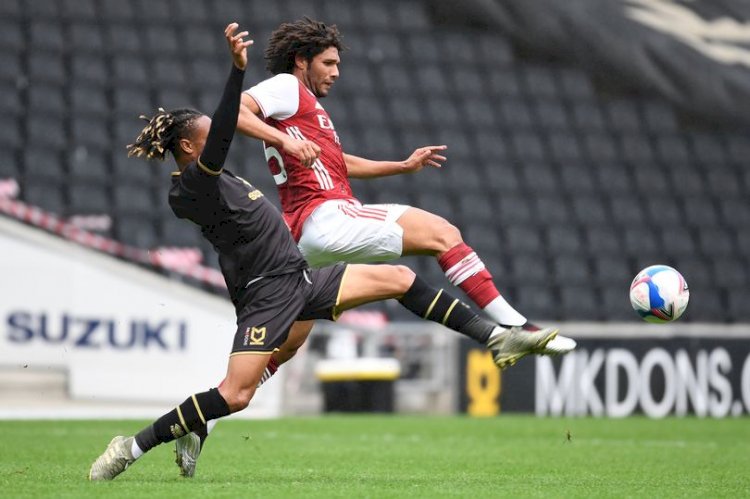 Mo Elneny returned to the Arsenal side against MK Dons to offer Mikel Arteta food for thought (Image: 2020 The Arsenal Football Club Plc)

Arsenal warmed up for Saturday’s Community Shield meeting with Liverpool on Tuesday with a comfortable 4-1 victory over MK Dons.

There were plenty of encouraging takeaways for Gunners boss Mikel Arteta, with goals from youngsters Eddie Nketiah, Reiss Nelson and Mark McGuinness.

But there was also a goal for forgotten man Mohamed Elneny, who marked his return to the club with the opener as the FA Cup winners cruised to victory over their third-tier opponents.

Last summer, Unai Emery told the versatile midfielder that he was not part of his plans. However, with the Spaniard having been replaced by Arteta, the Egyptian may have found a new lease of life in north London.

Elneny started at the base of Arteta’s midfield alongside Granit Xhaka as Arteta once more opted for a three-man backline and wing-backs either side of the midfield pairing in Cedric Soares and Wolves target Ainsley Maitland-Niles.

The 28-year-old, who has made 89 appearances for the Gunners since joining from Basel in 2015, looked typically solid and understated against MK Dons, often breaking up play and pushing his side up the pitch with forward passes.

It would be reckless to draw definitive conclusions from a pre-season clash with lower-league opposition, but many Arsenal fans will have been encouraged to see Elneny back in the club’s colours after a year away.

While the Gunners have signed Willian and made permanent moves for loanees Pablo Mari and Cedric, midfield remains a problem position for Arteta.

Thomas Partey remains a dream midfield target for many Arsenal supporters, but Elneny could be an easier - and cheaper - solution to Arteta’s midfield headache.

The Spaniard presumably will have been pleased with his contribution to win over MK Dons, which could lead to more minutes in the Community Shield against Liverpool.

Producing a similarly commanding display against the Premier League champions may force Arteta into reassessing his plans for the summer.

As a natural holding midfielder, Elneny offers Arsenal protection and positional discipline in front of the back-line. Dani Ceballos and Xhaka can also perform that role, but Elneny’s involvement would afford Arteta the option of playing Ceballos and Xhaka slightly further forward, with the Egyptian at the base of a three-man midfield.

Interestingly, Elneny has never managed more than 11 starts in a Premier League season. Often a squad player, he did, however, create 11 chances in just 866 minutes of action (per Opta ) during the 2017/18 season, Arsene Wenger’s final year at the club.

His involvement was reduced under Emery, though, playing only 380 minutes before benefitting from regular game time at Besiktas with 27 league starts to help the Istanbul club finish third.

A neat passer and astute reader of the game, Elneny may be on the cusp of earning a golden opportunity to salvage his Arsenal career against Liverpool.

However, it remains unclear whether or not the player figures in Arteta’s long-term vision for the club, and whether or not playing well against the Reds will impact his thinking.

Following his productive loan spell with Besiktas, there is heavy interest in Elneny’s signature from Turkey, with Galatasaray, Trabzonspor and Fenerbahce all keen to lure the midfielder back to the Super Lig, as per Turkish Football.

With Arteta keen to make the most of his first summer window charge at the helm, it is possible that he would prefer to cash in on Elneny and use those funds to pursue other targets.

It is difficult to predict where Elneny will be playing his football next season. If he wants to stay at Arsenal, he can certainly offer Arteta some protection in midfield as the Spaniard aims to return the club to the Champions League.

However, if he wishes to leave, Arteta will be unlikely to stand in his way, and if the Gunners are able to recoup a decent fee for the 78-time Egypt international, fans would not kick up much of a fuss if it boosted the club’s pursuit of Partey.

Houssem Aouar has already teased his next move amid tal...