Dani Ceballos is set to return to Arsenal for a second loan spell, giving Mikel Arteta the perfect midfield general 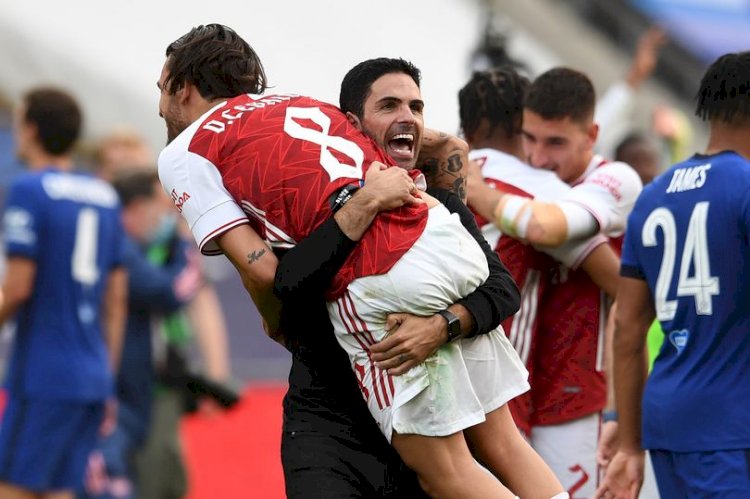 If you had asked Mikel Arteta early in his Arsenal reign whether he envisaged bringing Dani Ceballos back for a second season it is highly unlikely that you would have got the same eagerness from the head coach that has defined the Gunners’ attempts to bring the Spaniard back to the Emirates Stadium this season.

Indeed at the midway point of the campaign Ceballos seeing its conclusion seemed an unlikely prospect as he and Arsenal mulled interest from Valencia in taking over the loan deal.

The 24-year-old is set to rejoin the Gunners on a further season long loan after a breakthrough in negotiations with Real Madrid. Of all the signings Arteta makes this summer there may not be another as valuable.

Ceballos knows Arteta’s system, was critical in their late season revival and, crucially, has shown an ability to swiftly adapt to Arsenal’s changing demands.

Certainly it has not been Arteta that has changed to accommodate Ceballos. The system was modified for the run-in but what the Arsenal head coach expected of his deeper midfielders - tenacity, composure and consistency - has not.

Instead what Arteta forged in Ceballos’ second act with Arsenal was a midfielder in his own image, a consistent presence at the base of midfield who is capable of stepping forward when required but no less able to win the ball.

In Arteta’s initial, Mesut Ozil-centric vision there was no obvious fit for Ceballos. Granit Xhaka’s ability to drop deep and act as defensive ballast on the left flank meant he was another guaranteed starter and with two ball players the industry of a Matteo Guendouzi or Lucas Torreira seemed a more natural fit in the midfield triumvirate rather than the graceful jitterings of the Spaniard.

For a time Arsenal expected to part ways with Ceballos only for the Spaniard to redouble his efforts in training - he would subsequently admit that there was room for improvement - and catch Arteta’s eye. Time and time again, from ending plans to loan out Eddie Nketiah to reintegrating Ainsley Maitland-Niles into the first team, the head coach has proven that effort at London Colney will translate to opportunities at the Emirates.

The brief dalliance with Ceballos and Ozil looked promising in games where Arsenal could play on the front foot - most notably a thumping of Newcastle where the former brought to mind Santi Cazorla’s penetrative passing from deep - but there was always a sense that those two plus Xhaka was not enough to shield a threadbare defence.

Perhaps that would not be the case anymore. What is most likely to stop observers from finding out is Ozil’s absence, rather than Ceballos no longer being an Arsenal player.

Nowhere was the Spaniard’s importance more apparent than in Arteta’s post-restart switch to a three man defence. Suddenly Ceballos was asked to do more across the pitch, becoming a more vibrant, aggressive passer whilst still offering support to a backline that may have grown in quantity but still was capable of self-sabotage.

Ceballos’ defensive improvements were dramatic. According to twenty3 data provided for football.london he ranked sixth among Premier League defensive and central midfielders for successful defensive actions (including defensive duels, interceptions and sliding tackles) with 93 in 10 games. It is a tally that places him above the likes of Fabinho, Nenaja Matic and even top tacklers at lower table sides such as Declan Rice.

One would not confuse Ceballos with the best tacklers in world football but he has managed to harness his exceptional reading of the game for defensive ends - he completed 40 interceptions in his 10 games post-restart, more than he had managed in the rest of the Premier League season.

His defensive improvements arrived with an adapted but equally impressive passing range. Unsurprisingly Ceballos is around the penalty area more infrequently than earlier in the season, when he often had the free role in a 4-3-3 or was at the tip of a 4-2-3-1, and consequently he has played fewer passes in the final third. Indeed in total post-restart his passing numbers decreased significantly with the 24-year-old completing around 15% fewer passes than the 56 he averaged between August and March.

They may be fewer in number but they are more penetrative. At his worst under Unai Emery Ceballos was a chief contributor to the static, cumbersome build-up play that left Pierre-Emerick Aubameyang et al attacking a set defence.

The key metric in which his passing took a notable uptick was in through balls, completing double the number per 90 post-restart, as many as David Silva and one more than Ruben Neves, the Wolves midfielder whose blend of silk and steel makes him a similar player to Ceballos. His tally of seven completed through passes is fifth among Premier League midfielders since June.

Similarly only five Premier League players created as many chances in that time frame as Ceballos’ 11, among them Bernardo Silva and Kevin De Bruyne. Among the chief weaknesses of Arteta’s 3-4-3 can be the chasm that is left between the forwards and midfielders, particularly in central areas where the defence needs shielding and Lacazette needs service.

If anyone can bridge it is Ceballos, think of his searing pass through the Leicester backline in the build-up to Pierre-Emerick Aubameyang’s goal or these deliveries into the paths of overlapping right wing-backs in wins over Watford and Norwich.

That is Ceballos at his most natural, the role he feels most comfortable in. But with a renewed focus on defensive acumen his trajectory is beginning to resemble that of Arteta, another attacking midfielder who dropped ever deeper during his career.

"He is very happy with my way of playing, above all when I have the ball, but also when I don't,” Ceballos told Sky Sports in July.

"We have also spoken a lot and worked a lot on the defensive aspects of my role, my positioning on the pitch when it's time to defend. I would like to play a bit further forward, of course, but I feel comfortable in this position because I like to touch the ball as much as possible.

"I think I have improved a lot. The truth is that today, I am a much more tactical and technical player than I was before. And whichever position the mister needs me in, I will try to give my best performance."

Such is the bond Arteta has fostered with Ceballos, a player that seemed to be paying the price for not adhering to the new vision.

Ceballos may not be the player Arsenal thought they were signing when he arrived from Real Madrid for his first loan spell over a year ago but he has become something rather more valuable: an embodiment of Arteta’s philosophy. Hard work has been rewarded on and off the pitch, an individual has adapted to suit the needs of the collective.

That in doing so Ceballos has turned himself into a player far more similar to his head coach can only help increase his standing in Arteta’s eye.

Brian McBride out as GM of USMNT, says report