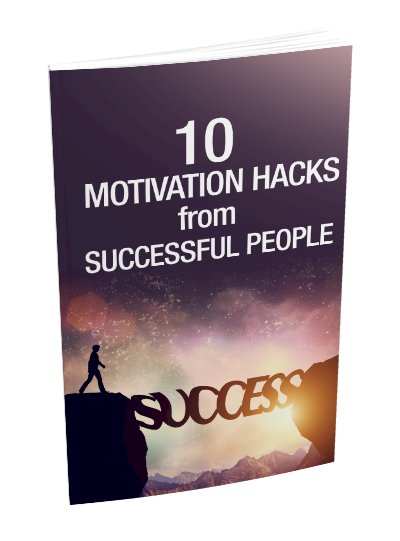 Ever wanted to be highly successful?

There is no secret formula. There is just hard work and motivation. If you KEEP trying at your goal. If you put in the work every single day. If you are single minded in your determination and you DO NOT GIVE UP, then eventually you will be successful.

Don’t believe me? In a moment, when you have read the inspiring advice from the motivators below, then you will. These incredible individuals stand as pillars of success, ingenuity, and determination. But at the same time, they also show us that the path to success is not so special – that they used normal techniques and that they faced many of the same challenges we do.  Learn from them, and you can achieve beyond your wildest dreams too.

#1 Have A Singular Goal – Arnold Schwarzenegger

Arnold Schwarzenegger is undoubtedly one of the most successful people on the planet. Not only did Arnie get into incredible shape and build a huge amount of muscle, but he also managed to become the highest paid movie actor of his time, and the governor of LA.

That’s all pretty impressive for a guy who grew up in a rural village in Austria, and who had a thick accent to contend with!

How did he do it? Simple: he worked extremely hard. Arnie recalls how he would train for hours at a time, run businesses, and simultaneously work on his English at night school. He was able to do all this for one reason and one reason alone: because he had a single goal that he was absolutely passionate about. He said that every gruelling rep was worth it because he knew that at the end of each one, he would be a step closer to his end goal.

With every single curl and press, he was closer to becoming Mr. Olympia.

In other words, Bruce Lee “feared” (or respected at least) mastery. Bruce was enamoured with those who had honed and perfected their technique through countless hours of rigorous practice. This is what we all can hope to accomplish and what we all should aim for.

This relates to a subject in fitness called “greasing the groove.” Essentially, the argument here is that by training a movement or a pattern every single day, you will find it becomes more and more deeply ingrained with every attempt. Eventually, it will become second nature and you will be faster, stronger, more efficient and more capable.

So, while that perfect mastery might seem a long way now, keep in mind that each attempt is just one of your thousand reps. That every single attempt makes you a little bit better. Eventually, you’ll be a master.

Author Tim Ferriss is responsible for starting the “lifestyle design” movement, and can even take some amount of credit for the equally big health tracking trend. Tim’s books have all reached the bestseller lists, he has worked with some of the most successful people on the planet, he has run multiple businesses, and he also has a HUGE podcast. If you haven’t checked him out, then we recommend you do!

Tim recommends a technique called fear setting to achieve your goals.  The idea is that many of us fail to make progress because we’re scared of failure. You might not apply for other jobs because you’re scared of what leaving your current work might mean. You may not speak to an attractive member of the opposite sex because you’re too scared of rejection.

But here is the thing: most of us fail to ever define precisely what we’re afraid of. As a result of this, we end up blowing those fears out of all proportion and becoming frozen in fright.

By taking a moment to write down precisely what it is you are scared of, you will often realize that your fears really aren’t all that bad and that you’re perhaps overreacting. Write down all the things you’re scared of, and then next to each point, write down how likely it is to happen, how it could be prevented, and what you would do in that worst-case scenario.

For example, let’s discuss leaving your job for a new one. Perhaps you’re scared that you’ll leave your job and not like the new position, you’ll end up getting fired or leaving, and then will be penniless. Your partner will leave you because you made such a bad decision, your children will go hungry, and you’ll be forced to sell your home. The gap on your CV means you’ll never work in that industry again.

Okay, so how likely is this?

First: you won’t give up your current job until you have the new one. Second: if you don’t like the new job, you can just look for work again. There are laws in place to prevent unfair firing, and you should be able to get a very good idea of the workplace culture and vibe before you transition to the new position.

All of this makes the chances of ending up jobless much smaller. Now consider that you probably could get your old job back if ever you needed to. That you likely have at least some savings you could live off for a while. That your parents might step in to help. That you can discuss the idea with your partner. And that they support your decisions.

ALL of this makes you realize that the “fears” were simple constructs of your own mind.

Elon Musk is probably the closest thing we have to a modern day Tesla – to the point that he named one of his companies after him! Elon went from complete obscurity to running PayPal, Tesla, and Space-X. He is almost entirely responsible for driving the commercial space travel industry, is transforming the environment with electric cars, and is known for pulling off Tony Stark-esque PR stunts.

How does he do all this? Simple: Elon Musk clearly loves being the guy to introduce the world to science fiction ideas. He has spoken before about how he dislikes boring businesses. As such, he has chased after his biggest goals and ambitions.

Simply by doing this, he has been more successful. That’s true because he loves what he is doing and feels motivated to wake up every day. But it’s also true because such big lofty goals actually motivate other people better too. They are memorable, they garner media attention…

So, don’t have small goals! Make it awesome and go for broke.

Einstein is just one example of a great thinker who had his epiphany while relaxing. The story is famous by now: he was sorting through patents at the patent office where he worked, then the theory of special relativity came to him in a vision. He visualized what it would feel like to fall off of a roof while watching another object fall from the same point. In doing so, he understood relativity!

Why did this happen? The answer is that he was actually engaging in what most of us would consider menial or mindless work. When we do this, it activates a network of brain regions known collectively as the “default mode network.” The reason this is important, is that this network is responsible for creativity, imagination, and daydreaming.

#6 Don’t Be Afraid To Promote Yourself – Ali

Ali was the greatest of all time, and he had no qualms about letting you know it! He was constantly running his mouth off to his competitors, to the press, and to anyone who would listen.

This might make it seem as though he had a big ego, but in fact he was just being honest about what he believed. And at the same time, this helped him to remind others of his best qualities… especially his opponents!

We’ve all been brought up to be humble and shy about our accomplishments. But if you notice, most of the most successful people in the world actually like talking about just how successful they really are. It’s no coincidence!

#7 It Ain’t About How Hard You Hit – Sylvester Stallone

This excellent life advice was spoken by Rocky Balboa in the film of the same name, but was penned by Sylvester Stallone – and could have been about his own life!

The full line is:

As a boxer, this line makes perfect sense spoken by Rocky. But it is also a fantastic metaphor. No matter how talented you are, if you get put off by the first setback, then you will never be successful. So keep moving forward.

Navy SEAls go through hell on a regular basis, and that’s just during training (in fact their most gruelling test is actually called hell week). They do this in order to prepare their bodies and minds for the kinds of situations they will need to perform in when they are actually fighting wars.

So how do they cope? One of the tools they use is a mental trick called nonreactivity. That means simply choosing not to react to bad news, stress, anxiety, or setbacks. This has a lot in common with the school of thought known as Stoicism. It basically means that while you can’t prevent bad things happening, you can prevent yourself being upset about them.

Notice what has happened, and move on. You can worry about it later.

#9 You Only Need To Be Successful Once – J.K. Rowling

J.K. Rowling has one of those classic successful stories of being turned down by just about every single publisher before finally getting a book deal. This was good news for her and for the publisher, as the Harry Potter series went on to make more money than anyone could have predicted.

This is a testament to Rowling’s determination and self belief, things we have already discussed at this point.

But it also reminds us of one other fact: that you only need to be successful once.

This is why hard work and determination are so important. Because the more you keep trying, the more you stack the odds in your favor. If you sell enough products then ONE will eventually be a massive hit. If you ask enough people, then someone will eventually say yes.

#10 Be The Last To Get Off The Treadmill – Will Smith

Will Smith is another actor whose success seems astronomic. After starting his career acting in a sitcom, Will went on to become one of the highest paying blockbuster actors in Hollywood. He took on dramatic roles as well as bigger roles, and he had many other successes in music and business along the way.

What’s his secret? Will puts it down to “staying on the treadmill longest.” He doesn’t believe he’s the most talented, but he says he will not STOP putting in the hard work until he has done the absolute most he possibly can do.

Thus, when everyone else has long gone home and given up the ghost, he is still churning away and pumping out work. That ensures that he stands out, and it gives him a huge competitive advantage over everybody else.

Lycamobile has the cheapest data bundles in Uganda

Boost Your Online Sales in Less Than 7 Days: 5 Things T...